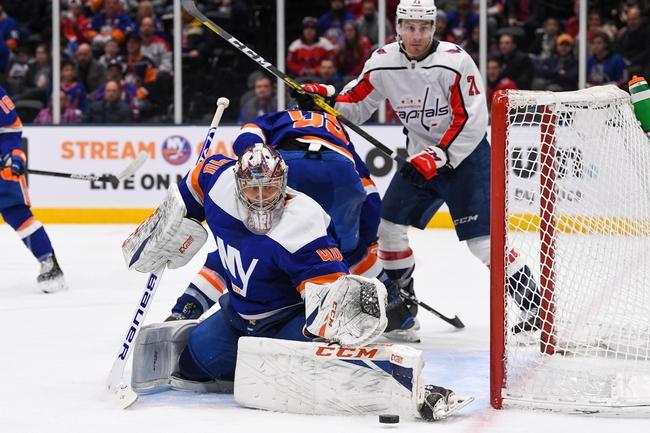 The New York Islanders and the Washington Capitals meet in a Metropolitan division clash in NHL action from the Capital One Arena on Monday night.

The New York Islanders will look to rebound after a 3-1 loss to the Tampa Bay Lightning in their last outing. The game was deadlocked after the opening 20 minutes but Tampa Bay broke the tie with the game’s opening goal just :14 into the 2nd period. The 1-0 score would hold up going into the 3rd where the Bolts doubled their lead just over six minutes into the final frame. Derick Brassard cut the deficit in half for the Islanders, but 2-1 was as close as they would get as Tampa Bay iced the win with an empty-netter with just over a minute to play, securing the victory. Semyon Varlamov took the loss, falling to 16-9-4 on the year after stopping 27 of 29 shots faced in the losing effort.

The Washington Capitals will look to rebound after ending up on the wrong end of a 7-2 beatdown loss to Philadelphia at home last time out. Philly opened the scoring with just under five minutes to go in the opening frame but T.J. Oshie would tie the game at one with just under two minutes to play in the 1st. Philadelphia broke the game open in the 2nd, with a pair of goals :14 apart just before the three-minute mark of the 2nd and the Flyers would add a 4th just 1:31 after that. The Flyers would tack on three more goals in a span of 5:04 early in the 3rd before Evgeny Kuznetsov pulled a consolation goal back with just under eight minutes to go in the 3rd period. That was as close as Washington would get though, as the Flyers shut the door the rest of the way. Braden Holtby took the loss, falling to 20-11-4 on the year after allowing all 7 goals on 25 shots faced in the losing effort.

I really want to give a look to the Islanders with the decent sized plus money, but I picked the Isles against the Lightning and New York just didn’t show up and now the Islanders have to deal with a Capitals team that’s ticked off after being humiliated at home and suffered their worst loss since October 2015 when San Jose blanked them 5-0. I just don’t think that the Islanders will have an answer for what the Capitals are going to bring to this game, so I’ll side with Washington and to get the price down I’ll side with the Capitals to get the job done in regulation.