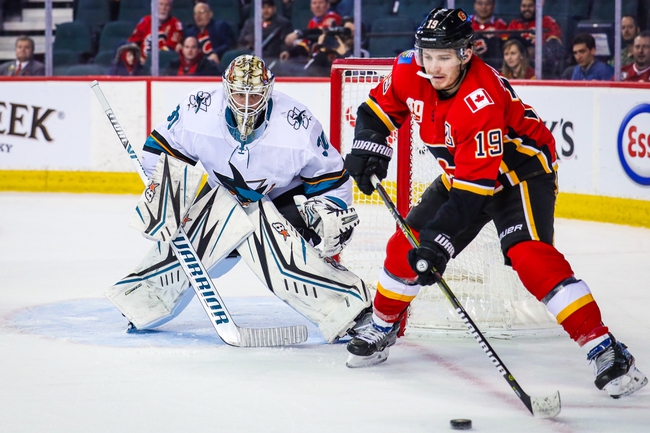 Where to Watch: SN-West, NBCS-California Stream live sports and exclusive originals on ESPN+. Sign up now!

The Calgary Flames and the San Jose Sharks meet in a Pacific division matchup in NHL action from the SAP Center on Monday night.

The Calgary Flames will look to build on a 6-2 win over Vancouver last time out. Vancouver opened the scoring just :34 into the game before Derek Ryan tied the game at one just 3:46 later. Matthew Tkachuk gave Calgary a lead with just under eight minutes to go in the opening period. Vancouver tied the game at two by the end of the 1st, but that’s where Vancouver’s luck ran out as Dillon Dube gave the Flames the lead just under three minutes into the 2nd before Milan Lucic doubled the lead, making it 4-2 early in the 3rd. Sean Monahan and Tobias Rieder scored 1:48 apart to push the lead to an insurmountable 6-2 cushion, a lead that the Flames would ride to the finish line. David Rittich got the win to improve to 21-14-5 on the year after stopping 25 of 27 shots faced in the winning effort.

The San Jose Sharks will look to build on back-to-back wins after a 6-3 win over Edmonton in their last outing. Edmonton jumped out to an early 2-0 lead with a pair of goals 1:16 apart within the first 5:20 of the game before Timo Meier pulled one back with just under nine minutes to go in the 1st. Evander Kane tied the game at two by the end of the 1st before Maxim Letunov and Stefan Noesen pushed San Jose’s lead to 4-2 by the end of the 2nd period. Meier pushed the lead to 5-2 just over five minutes into the 3rd with his 2nd goal of the game but Edmonton would respond just 1:28 later to bring the deficit back to two goals. Kevin Labanc would restored the three-goal lead with just under eight minutes to go in the game, securing the win for the Sharks. Aaron Dell got the win to improve to 11-10-2 on the year after stopping 28 of 31 shots faced in the winning effort.

Calgary and a low line on the road is tempting given that the Flames have played some of their best hockey away from home over the last couple of months. However, the Flames haven’t had luck against San Jose for the most part, including dropping both games this season by the same score of 3-1. San Jose needs to start putting serious work if they’re going to salvage any hopes of a playoff push down the stretch, and given their history with Calgary, this seems like a good place to try to get that started. I’ll side with the Sharks at home here.