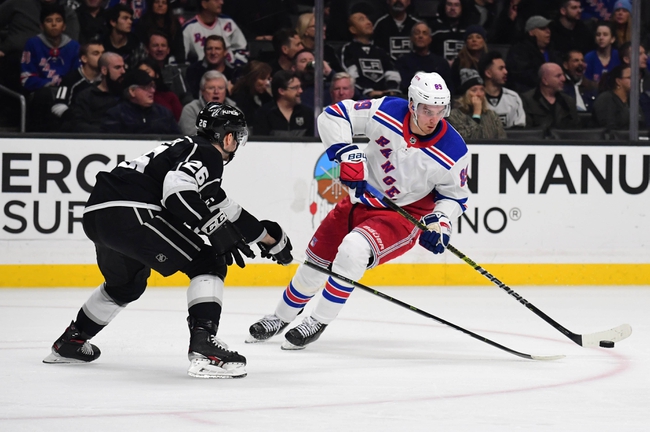 Where to Watch: FS-West, MSG+ Stream live sports and exclusive originals on ESPN+. Sign up now!

The Los Angeles Kings and the New York Rangers meet in NHL action from Madison Square Garden on Sunday evening.

The Los Angeles Kings will be out to snap a four-game losing streak after a 3-0 loss to the New Jersey Devils in their last outing. The game was scoreless through the opening 20 minutes before New Jersey did all of the game’s scoring within a span of 5:05 early on in the 2nd period up until just after the midway point of the middle frame. Los Angeles outshot the Devils in the 1st and 3rd and outshot New Jersey in the game 37-34, but even with all of that, the Kings wouldn’t find the back of the Devils’ goal. Joakim Ryan led the Kings with 5 shots on goal while Michael Amadio and Dustin Brown each had 4 shots on goal. Calvin Petersen took the loss, falling to 0-1-0 after allowing all 3 goals on 34 shots faced in the losing effort.

The New York Rangers will look to rebound from a 3-2 loss to the Buffalo Sabres last time out. Buffalo scored in each period, taking a 3-0 lead with just over eight minutes to go in the 3rd, and the Rangers almost ended up being shut out, but Mika Zibanejad and Chris Kreider made things interesting, scoring 1:24 apart to cut the deficit to 3-2 with just under two minutes to play, but despite outshooting the Sabres 23-6 in the 3rd period, 3-2 was as close as the Rangers would get as Buffalo held on for the win against their in-state foe. Alexandar Georgiev took the loss, falling to 12-11-1 on the year after allowing all 3 goals on 28 shots faced in the losing effort.

The Kings and the plus money could be worth a look given that L.A. has won the last 4 head-to-head meetings against the Rangers. However, the Kings remain an automatic fade on the road, and being on a back-to-back doesn’t help matters, especially when the Kings looked flat against a Devils team that I’ve been going against for most of the season. New York’s been playing pretty well for the last couple of months, at least quite a bit better than what the Kings have brought to the table, so I’ll side with the Rangers here and to get the price down, give me New York on the puck line.