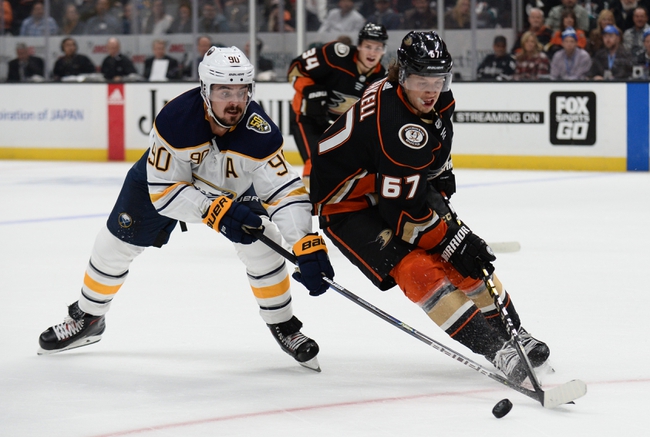 The Anaheim Ducks and the Buffalo Sabres meet in NHL action from the KeyBank Center on Sunday afternoon.

The Anaheim Ducks will look to rebound from a 5-4 overtime loss to the Toronto Maple Leafs last time out. Toronto opened the scoring less than five minutes into the game before Nicolas Deslauriers tied the game at one just after the midway point of the opening period. Toronto surged ahead by the end of the 2nd period, but Max Jones and Adam Henrique would tie the game at three just after the midway point of the 3rd period. Toronto would take the lead with just three and a half minutes to go, but Derek Grant would tie the game at four for Anaheim with less than a minute to go. The game went to OT and we looked destined for a shootout, but Toronto would pot the game-winning goal with just :07 to go in the game. Ryan Miller took the loss, falling to 6-5-3 on the year after allowing all 5 goals on 35 shots faced in the losing effort.

The Buffalo Sabres will look to build on a 3-2 win over the New York Rangers in their last outing. Zemgus Girgensons gave Buffalo the lead just after the midway point of the opening period before Sam Reinhart doubled the lead with the lone goal of the 2nd period. Jimmy Vesey scored against his former team with eight minutes to go in the game to make it 3-0, but the Rangers wouldn’t go down quietly with a pair of goals 1:23 apart in the 3rd period. The bad news for New York is 3-2 was as close as they’d get despite outshooting the Sabres 23-6 in the 3rd period. Carter Hutton got the win to improve to 8-9-4 on the year after stopping 37 of 39 shots faced in the winning effort.

I’ve gone back and forth on this one, and Buffalo has been the better team at home so far this season, and home ice is where the Sabres have historically played their best. However, I’m still fading the Sabres for the time being as I just haven’t liked what I’ve seen from Buffalo even with the win over the Rangers. Anaheim has had issues of their own, but the Ducks showed fight against Toronto and they’re providing the better price here, so I’ll take a shot with the Ducks and the plus money here.