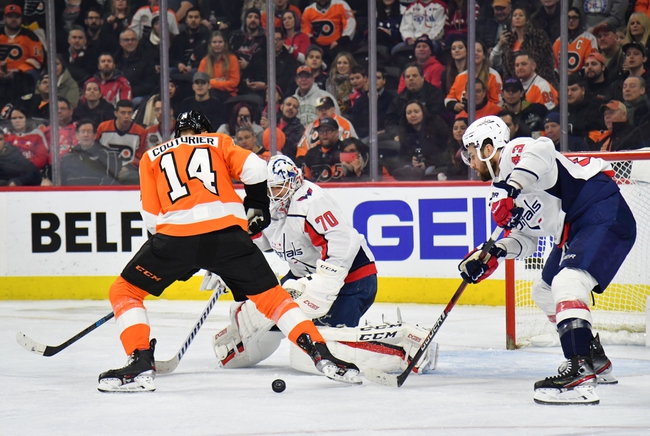 The Philadelphia Flyers and the Washington Capitals meet in NHL action from Capital One Arena on Saturday night.

The Philadelphia Flyers will look to rebound from a 5-0 loss to the New Jersey Devils last time out. New Jersey opened the scoring just :13 into the game and doubled their lead early on in the 2nd period. The Devils struck twice more within the first 4:23 of the 3rd period and added a 5th goal for good measure just after the midway point of the final frame to secure the blowout win. Scott Laughton and Travis Sanheim each had a team-high 5 shots on goal while Philippe Myers, Kevin Hayes and Jakub Voracek each had 4 shots on goal. Brian Elliott took the loss, falling to 13-6-4 on the year after giving up 4 goals on 17 shots faced in the losing effort.

The Washington Capitals will look to build on a 4-2 win over Los Angeles last time out. Los Angeles opened the scoring with the lone goal of the opening period before John Carlson tied the game at one with the lone goal of the 2nd period. The game remained tied through the first half of the 3rd period before Alex Ovechkin did what the Great 8 does, and scored a hat trick in a span of 4:24 to push the Caps ahead 4-2, and secure another win for Washington. Braden Holtby got the win to improve to 20-10-4 on the year after stopping 29 of 31 shots faced in the winning effort.

Philadelphia has been playing pretty decent hockey lately, but that big loss to New Jersey definitely dealt my confidence a blow, and while Washington has a stellar road record this season, the Caps have still been pretty good at home as well and I just think this is another spot for Washington to keep their roll going and to get the price down, I’ll take the Capitals to win in regulation.