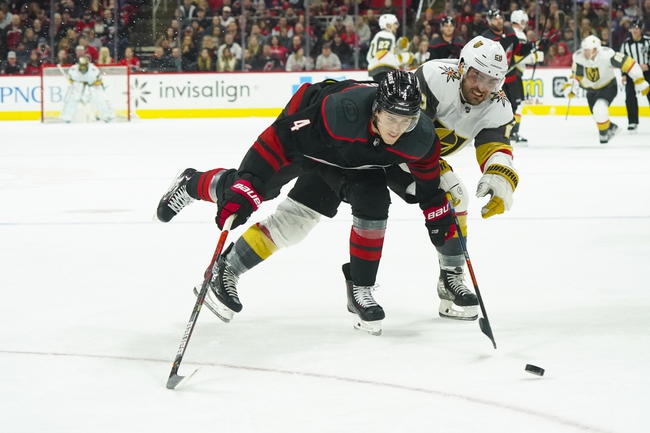 Where to Watch: ATT-RM, FS-Carolina Stream live sports and exclusive originals on ESPN+. Sign up now!

The Carolina Hurricanes and the Vegas Golden Knights meet in NHL action from the T-Mobile Arena on Saturday night.

The Carolina Hurricanes will look to build on a 5-3 win over Arizona in their last outing. Arizona took the lead with the lone goal of the opening period before doubling their lead just over four minutes into the 2nd period. Andrei Svechnikov would get the Hurricanes on the board just a minute later before Jacob Slavin tied the game at two at the nine-minute mark of the 2nd and Svechnikov gave Carolina the lead at 3-2 just 2:01 later. Sebastian Aho pushed the lead to 4-2 just over a minute into the 3rd but Arizona would respond just 2:24 later and that was as close as the Coyotes got as Aho slammed the door shut on any comeback attempt with an empty net goal in the dying seconds. James Reimer got the win to improve to 13-6-1 on the year after stopping 30 of 33 shots faced in the winning effort.

The Vegas Golden Knights will look to build on a 7-2 win over the Florida Panthers in their last outing. Mark Stone opened the scoring for Vegas just over two minutes into the game before Florida tied the game later in the period. Stone gave Vegas a 2-1 lead with his 2n goal of the game early in the 2nd, but Florida would tie the game again just over ten minutes later. Max Pacioretty gave the Golden Knights the lead back just :26 later, followed by goals by Nate Schmidt, Shea Theodore and Jonathan Marchessault early in the 3rd to push the lead to 6-2. Pacioretty added a cherry on top with a 7th goal for Vegas with just under five minutes to play as Vegas cruised to the win. Marc-Andre Fleury got the win to improve to 21-13-4 on the year after stopping 23 of 25 shots faced in the winning effort.

I get that Carolina has played slightly better over their last ten games, but the Hurricanes have still had issues getting the job done on the road, and while Vegas has had their issues lately, the Golden Knights have been historically strong at home and I just think the Golden Knights build on their strong offensive performance with a big night here, so I’ll lay the juice with Vegas at home in this one.