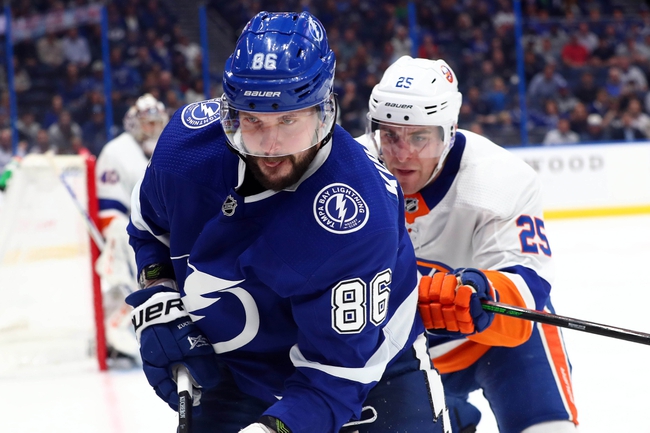 Where to Watch: SunSports, MSG+2 Stream live sports and exclusive originals on ESPN+. Sign up now!

The New York Islanders and the Tampa Bay Lightning meet in NHL action from the Amalie Arena on Saturday night.

The New York Islanders will look to build on back-to-back wins after a 5-3 win over Los Angeles last time out. Los Angeles took the lead with a pair of 1st period goals before Michael Dal Colle got the Islanders on the board less than two minutes into the 2nd period. Los Angeles restored the two-goal cushion just over five minutes later before Kieffer Bellows responded for the Islanders just 3:13 later. Matt Martin tied the game at three just :23 into the 3rd before Bellows gave the Islanders the lead with just under eight minutes to go in the game. Anders Lee iced the win for New York with an empty-netter in the dying second of the 3rd. Thomas Greiss got the win to improve to 15-7-2 on the year after stopping 22 of 25 shots faced in the winning effort.

The Tampa Bay Lightning will look to add to their current five-game winning streak after a 4-2 win over Pittsburgh last time out. Mikhail Sergachev opened the scoring just over minutes into the game before Steven Stamkos doubled the lead just 3:51 later. The Penguins pulled one back just before the midway point of the 2nd period but Anthony Cirelli would restore the two-goal cushion just :32 later. Pittsburgh would cut the deficit to 3-2 early in the 3rd and outshot Tampa Bay 10-4 in the 3rd, but the Bolts would hold on and add an empty-netter to pick up the win. Andrei Vasilevskiy got the win to improve to 28-9-3 on the year after stopping 29 of 31 shots faced in the winning effort.

I get that the Lightning are at home and have played better hockey as of late, but the problem for me is that this price tag is insane when you consider that it’s against an Islanders team that’s been pretty good this season and have been decent on the road as well. I just think there’s simply too much value to pass up with the Islanders here, so I’ll side with New York in this one.