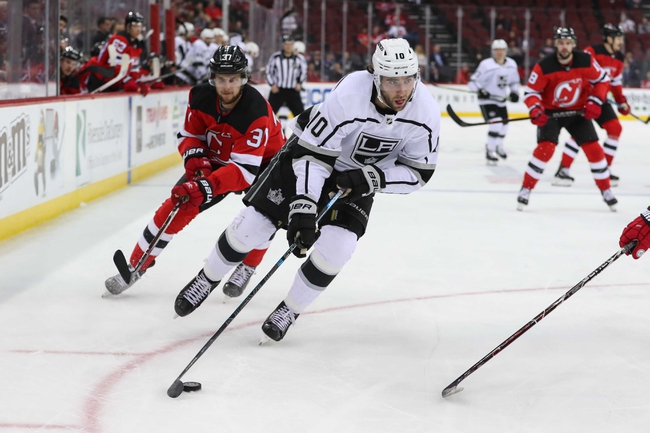 The Los Angeles Kings and the New Jersey Devils meet in NHL action from the Prudential Center on Saturday night.

The Los Angeles Kings will be out to snap a three-game losing streak after a 5-3 loss to the New York Islanders last time out. Ben Hutton opened the scoring for the Kings just after the midway point of the opening period and Alex Iafallo doubled L.A.’s lead exactly seven minutes later before the Islanders got on the board early in the 2nd period. Trevor Lewis restored the Kings two-goal lead just over five minutes later, but the Isles would respond again just 3:13 later, giving us a 3-2 game heading to the 3rd. New York would tie the game at three just :23 into the 3rd and would take the lead with just over seven minutes to play before icing the win with an empty-netter late in the 3rd, sending the Kings to yet another road loss. Jonathan Quick ended up with the loss, falling to 11-21-3 after allowing 4 goals on 32 shots faced in the losing effort.

The New Jersey Devils will look to build on a 5-0 win over the Philadelphia Flyers in their last outing. Blake Coleman opened the scoring just :13 into the game and Dan Severson doubled the lead with the lone goal of the 2nd period. Pavel Zacha stretched the lead to 3-0 early in the 3rd before Miles Wood potted a pair of insurance markers later in the 3rd to take the insurmountable 5-0 lead that they’d ride to the finish. MacKenzie Blackwood got the win, improving to 16-12-7 on the year after stopping all 46 shots faced for his 2nd shutout of the season.

I’m not trying to go near this game personally but side by side, the Devils have been playing much better than the Kings since the all-star break, picking up points in all five games since the break. Los Angeles continues to find ways to lose games on the other hand, and while neither team is going anywhere fast, it’s New Jersey that’s been playing well enough to warrant the low line here so I’ll lay the juice with the Devils in this one.