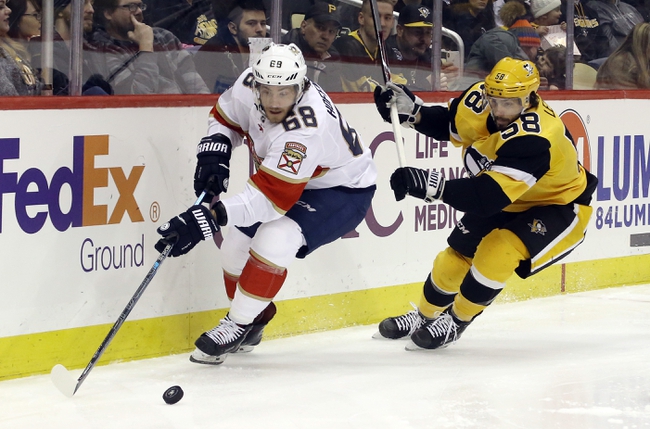 Where to Watch: ATT-Pitt, FS-Florida Stream live sports and exclusive originals on ESPN+. Sign up now!

The Pittsburgh Penguins and the Florida Panthers meet in NHL action from the BB&T Center on Saturday night.

The Pittsburgh Penguins will look to rebound from a 4-2 loss to the Tampa Bay Lightning last time out. Tampa Bay opened the scoring, taking a 2-0 lead into the 2nd period where Evgeni Malkin pulled a goal back just before the midway point of the 2nd period but the Lightning would respond just :32 later, restoring the two-goal lead in the process. John Marino pulled another goal back for Pittsburgh to make it 3-2 early in the 3rd, but that was as close as the Penguins got as the Bolts added an empty-netter late in the 3rd to ice the victory. Matt Murray took the loss, falling to 16-7-4 on the year after stopping 25 of 28 shots faced in the losing effort.

The Florida Panthers will look to rebound from back-to-back losses after a 7-2 beatdown loss to Vegas last time out. Vegas took the lead just over two minutes into the game but Mike Hoffman tied the game with just under four minutes to go in the opening frame. The Golden Knights re-took the lead early on in the 2nd before Vincent Trocheck tied the game at two with just over eight minutes to go in the 2nd. Vegas would re-take the lead for good just :26 later, The Golden Knights would tack on four more goals in the 3rd period for good measure just to put the game out of reach. Sergei Bobrovsky took the loss, falling to 20-14-5 on the year after allowing 6 goals on 29 shots faced in the losing effort.

Florida as a home dog is tempting considering it’s where the Panthers have had a lot of recent success, but the problem is that the Panthers are stumbling a bit at the moment, and say what you want about the Penguins, Pittsburgh consistently finds ways to win games more often than not and it’s not often that you get Pittsburgh with valuable prices like these. I’ll take my shot laying the juice with Pittsburgh on the road here.