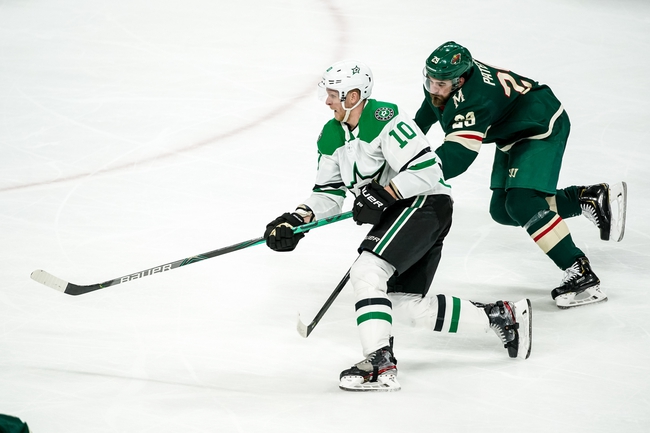 The Minnesota Wild and the Dallas Stars meet in NHL action from the American Airlines Center on Friday night.

The Minnesota Wild will look to build on a 4-2 win over the Vancouver Canucks in their lsat outing. Brad Hunt opened the scoring just over six minutes into the game before Ryan Hartman doubled Minnesota’s lad just after the midway point of the opening period and Kevin Fiala made it 3-0 Wild by the end of the opening frame. Vancouver pulled a goal back with the lone tally of the 2nd period but Minnesota would restore the three-goal lead with just over five minutes to go in the game. Vancouver made things interesting by cutting it to 4-2 with a minute and a half to go, but it was too little too late as Minnesota held on for the win. Alex Stalock got the win to improve to 13-8-3 on the year after stopping 24 of 26 shots faced in the victory.

The Dallas Stars will look to rebound from a 4-3 overtime loss to the New York Islanders in their last outing. New York opened the scoring just a minute and a half into the game before Denis Gurianov tied the game at one with just under six minutes to go in the opening period. Jason Dickinson gave Dallas the lead just after the midway point of the 2nd, but New York would respond just 1:26 later to tie the game at two. John Klingberg gave Dallas another lead early on in the 3rd, but New York would tie the game once more with just under four minutes to go in regulation, eventually forcing OT. New York would bury the game winner with just over two minutes to play in the extra frame. Ben Bishop took the OT loss, falling to 18-11-4 on the year after allowing all 4 goals on 41 shots faced in the losing effort.

The Wild looked pretty good in taking down the Canucks on Thursday, but the problem is that the Wild have had little success on the second half of a back-to-back for some time now, and the fact that Minnesota has struggled against Dallas doesn’t make the task any easier here. Dallas has a tough could of games on the horizon at St. Louis and at home against Carolina after that, but the road does get easier for a little while following that Hurricanes game, so I think that the Stars put their best foot forward as another winning run here could go a long way towards their playoff positioning. I just don’t see the Wild turning things around on the road, so I’ll side with Dallas on the puck line here.