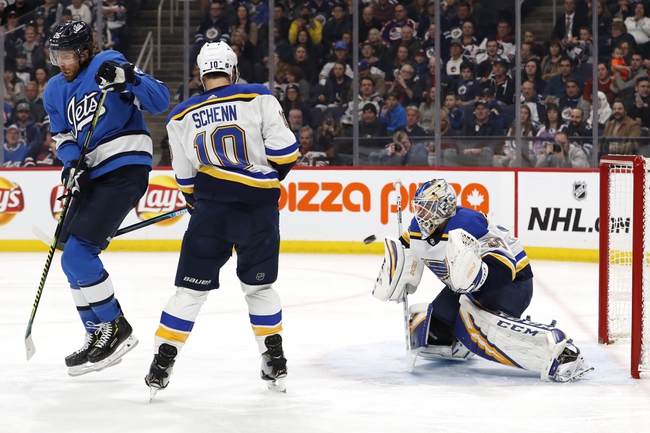 Where to Watch: TSN3, FS-Midwest Stream live sports and exclusive originals on ESPN+. Sign up now!

The Winnipeg Jets and the St. Louis Blues meet in a Central division matchup in NHL action from the Enterprise Center on Thursday night.

The Winnipeg Jets will look to rebound after a 2-1 overtime loss to Nashville last time out. Mason Appleton opened the scoring for the Jets just 2:46 into the game but the Preds would tie the game at one with just over two minutes to go in the opening period. Both teams traded chances back and forth in the remaining 40 minutes, but neither side would break the deadlock in regulation, forcing us to go to an extra period. Nashville found the game-winning goal just over a minute into overtime, giving Nashville the extra point and the win. Connor Hellebuyck ended up with the loss to fall to 22-16-5 on the year after allowing both goals on 36 shots faced in the losing effort.

The St. Louis Blues will look to build on a 6-3 win over Carolina last time out. Sammy Blais opened the scoring for the Blue just 2:44 into the game and the lead would hold until Zach Sanford and Colton Parayko pushed St. Louis’ lead to 3-0 within the first five minutes of the 2nd period. Carolina pulled a goal back just 1:15 later, but the Blues would respond just 1:26 later thanks to Brayden Schenn and Schenn would strike again just 4:23 later to push the lead to 5-1. Sanford scored his 2nd of the game to push the lead to 6-1 just after the midway point of the 3rd, and while Carolina pulled a couple of goals back down the stretch, the Blues would hold onto the 6-3 lead and ride that advantage to the victory. Jordan Binnington got the win to improve to 24-9-5 on the year after stopping 25 of 28 shots faced in the winning effort.

The Blues aren’t playing world-beating hockey right now, so a price tag like this is hard to stomach. However, the Blues are playing heads and shoulders better than the Jets right now, as Winnipeg just looks lost on the ice right now. I’ll side with St. Louis to pick up another win here, and to cut down the price tag, I’ll side with the Blues on the puck line.