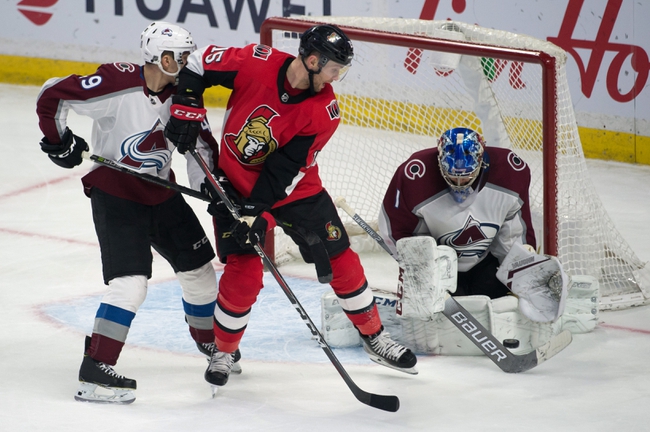 The Colorado Avalanche and the Ottawa Senators meet in NHL action from the Canadian Tire Centre on Thursday night.

The Colorado Avalanche will look to build on a 6-1 win over Buffalo in their last outing. Samuel Girard and Andre Burakovsky gave the Avs an early 2-0 lead with a pair of goals :45 apart before Buffalo pulled a goal back in the last second of the opening period. Nazem Kadri, Nikita Zadorov, Valeri Nichushkin and Mikko Rantanen scored in a span of 11:59 to push the Avalanche ahead 6-1 in the 2nd period, a 6-1 cushion that Colorado would ride to the final horn as Colorado picked up a massive road win. Philipp Grubauer got the win to improve to 15-11-4 on the year after stopping 23 of 24 shots faced in the winning effort.

The Ottawa Senators will look to snap a three-game losing streak after a 3-2 shootout loss to Anaheim last time out. Anaheim went ahead with the lone goal of the opening period before Drake Batherson tied the game at one for Ottawa less than five minutes into the 2nd period. The Ducks restored their lead later in the 2ndbefore Artem Anisimov tied the game early in the 3rd. The rest of regulation solved nothing and overtimedidn’t produce a winner, so it was off to the shootout where Anaheim scored on two of their three attempts while Ottawa missed both of theirs, giving the Ducks the win and the extra point. Marcus Hogberg took the loss, falling to 2-3-7 on the year after allowing 2 goals on 28 shots faced in regulation and overtime.

I considered taking Ottawa on the puck line starting out with the goal as the Sens have been competitive despite racking up the losses, with six of their losses in their last ten games going to OT or a shootout. However, as we saw against Buffalo, Colorado has just too much offensive firepower for some of these lesser teams to try to handle, and Ottawa is just another one of those teams that I think the Avalanche blow by. I’ll side with Colorado for the win and to cut down the heavy juice, I’ll back the Avalanche on the puck line.