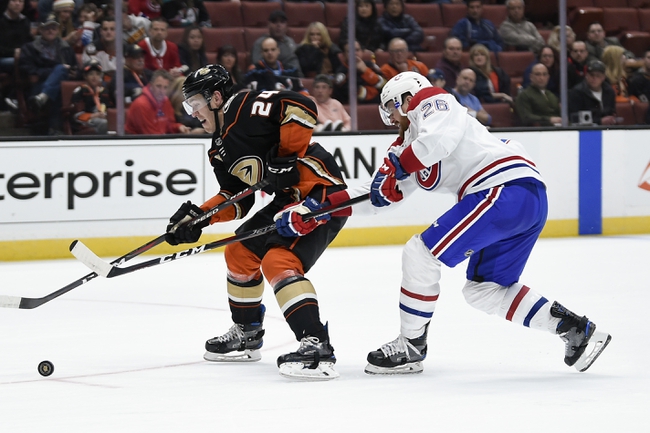 The Anaheim Ducks and the Montreal Canadiens meet in NHL action from the Bell Centre on Thursday night.

The Anaheim Ducks will look to build on back-to-back wins after a 3-2 shootout win over Ottawa last time out. Nick Ritchie opened the scoring for the Ducks with the lone goal of the opening period before Ottawa tied the game at one less than five minutes into the 2nd period. Ondrej Kase restored Anaheim’s lead with just over six minutes to go in the middle period but Ottawa would tie the game at two early on in the 3rd period. The rest of the final frame wouldn’t produce a winner and neither did overtime so it was off to the shootout where Anaheim scored on two of their three attempts while Ottawa missed both of theirs to give the Ducks the win and the extra point to go along with it. John Gibson got the win to improve to 16-21-3 on the year after stopping 30 of 32 shots faced in regulation and overtime.

The Montreal Canadiens will look to build on a 5-4 shootout win over New Jersey in their last outing. The Devils opened the scoring with the lone goal of the opening period and went up 3-0 with a pair of goals within the first seven minutes of the 2nd period. Joel Armia got the Habs on the board later in the 2nd period and Nate Thompson cut the deficit to 3-2 just under four minutes later. Nick Cousins and Christian Folin tied the game and gave Montreal a 4-3 lead 2:13 apart early on in the 3rd and Montreal nearly held on for the win but New Jersey would tie the game at four with just :20 to play in regulation. Overtime solved nothing in this game either so a shootout was needed, where Ilya Kovalchuk was the lone goalscorer of all five shooters, giving Montreal the win. Charlie Lindgren got the win to improve to 1-3-0 on the year after stopping 20 of 24 shots faced in regulation and overtime.

I get why the plus money with Anaheim would be tempting as the Ducks have rattled off a couple of wins and Montreal isn’t a team that I’d associate with a heavy price tag like this. However, I’ve said before that Montreal needs to take advantage of softer schedule spots like there as there’s still lots of time to salvage their season and Anaheim isn’t going anywhere anytime soon, so I’ll side with Montreal at home here, and to get the price down, I’ll side with the Habs on the puck line.