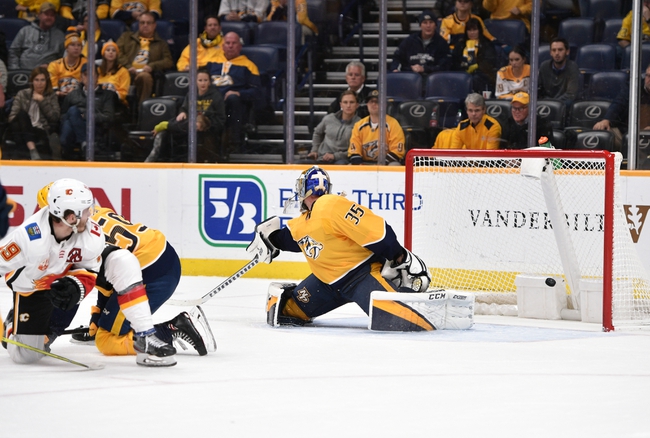 Where to Watch: SN1, FS-Tennessee Stream live sports and exclusive originals on ESPN+. Sign up now!

The Nashville Predators and the Calgary Flames meet in NHL action from the Scotiabank Saddledome on Thursday night.

The Nashville Predators will look to build on a 2-1 overtime win over Winnipeg last time out. Winnipeg opened the scoring just 2:46 into the game before Nick Bonino tied the game up at one with just over two minutes to go in the opening frame. The two sides would trade chances back and forth throughout the next two periods, but neither side would find a game-winner in regulation, so it was off to overtime where Nashville outshot the Jets 3-0, finding the game-winner just 1:11 into the extra period. Juuse Saros got the win to improve to 8-8-4 on the year after stopping 33 of 34 shots faced in the winning effort.

The Calgary Flames will look to rebound from back-to-back losses after a 3-1 loss to San Jose last time out. The game was scoreless through the opening 20 minutes before Johnny Gaudreau opened the scoring for the Flames with just under a minute into the 2nd period. San Jose would tie the game just 2:58 later and take a 2-1 lead just over four minutes after that. The 2-1 line would hold into the 3rd where the Sharks added an insurance goal just under eight minutes into the period. The Flames only mustered up 4 shots on goal in the 3rd period and it wasn’t enough as San Jose held on for the win. David Rittich took the loss, falling to 20-14-5 on the year after allowing 3 goals on 26 shots faced in the losing effort.

I get Calgary being favored because they’re at home, but the Flames haven’t been playing that great over the last few games and the Flames haven’t been that much better at home compared to Nashville on the road. Add in the fact that the road team and the underdog has had pretty much all of the recent success between the two sides, and I think the Predators hold some value here with the low line.