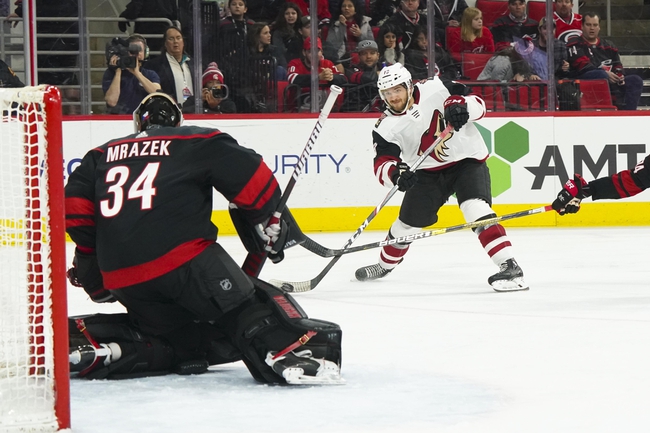 The Carolina Hurricanes and the Arizona Coyotes meet in NHL action from the Gila River Arena on Thursday night.

The Carolina Hurricanes come into this game looking to rebound after a 6-3 loss to St. Louis last time out. St. Louis opened the scoring just 2:44 into the game and the lead would hold going into the 2nd where St. Louis struck twice in the first 5 minutes of the 2nd period to go up 3-0 before Sebastian Aho got the Hurricanes on the board just 1:15 later. The Blues responded 1:26 later and added a 5th goal with just over eight minutes to go in the 2nd frame. St. Louis pushed ahead 6-1 just after the midway point of the 3rd period but Brock McGinn would respond just 1:50 later and Martin Necas made it 6-3 just over four minutes later, but that was as close as Carolina got as the Blues slammed the door shut the rest of the way. Petr Mrazek took the loss, falling to 18-14-2 on the year after allowing all 6 goals on 26 shots faced in the losing effort.

The Arizona Coyotes will look to build on a 3-0 win over the Edmonton Oilers in their last outing. The game was scoreless through the opening 20 minutes but Arizona would break the deadlock with a pair of goals 2:08 apart eacly on in the 2nd period. The Coyotes would carry that 2-0 lead through the 2nd and most of the 3rdbefore Christian Dvorak buried an empty-netter to lock up the win. Antti Raanta got the win to improve to 10-11-3 on the year after stopping all 30 shots faced in the winning effort.

I get Carolina being favored here as the Hurricanes have been the more consistent team as of late. However, Arizona finally got off the schneid with an impressive defensive display, looking like the team that used that defensive style to pick up wins left and right earlier on in the year. Carolina on the other hand has struggled on the road lately, and maybe the win over Edmonton got Arizona some mojo back. I’ll take a stab with Arizona and the even money here.