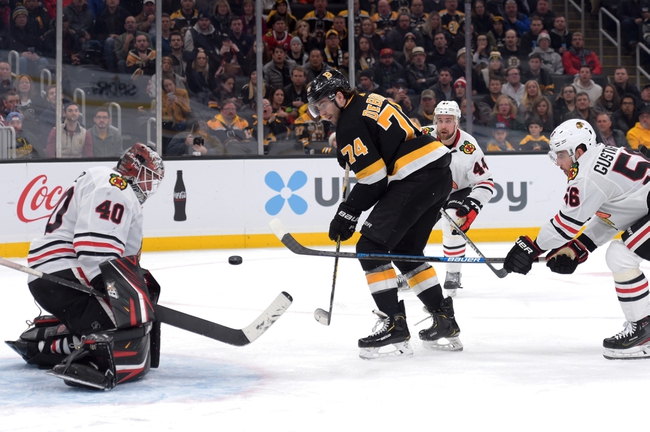 The Boston Bruins and the Chicago Blackhawks meet in NHL action from the United Center on Wednesday night.

The Boston Bruins will look to add to their current four-game winning streak after a 4-0 win over the Vancouver Canucks in their last outing. Charlie Coyle opened the scoring for the Bruins in the latter stages of the opening period before Brad Marchand doubled Boston’s lead with the lone goal of the 2nd period. David Krejci and Karson Kuhlman each had a goal to extend Boston’s lead to 4-0, coming 4:01 apart to give the B’s the four-goal cushion and an insurmountable lead with less than two minutes to play. Tuukka Rask got the shutout between the pipes, improving to 19-4-6 on the year after stopping all 25 shots faced for his 3rd shutout of the season.

The Chicago Blackhawks will look to rebound after a 3-2 overtime loss to the Minnesota Wild last time out. The game was scoreless through the opening 20 minutes before Minnesota struck less than four minutes into the second period and doubled their lead with less than four minutes to play in the middle frame. Adam Boqvist pulled a goal back for Chicago early on in the 3rd and Olli Maatta tied the game at two for Chicago with just over three minutes to play, eventually forcing OT. Minnesota would shut down Chicago’s comeback attempt by finding the OT winner just before the midway point of the extra period, sending the Blackhawks home with just a single point to show for their work. Corey Crawford took the OT loss, falling to 10-13-3 on the year after allowing all 3 goals on 34 shots faced in the losing effort.

The Bruins are back to playing solid hockey, so getting them as a favorite here, even on the road, makes sense. However, while a Bruins win wouldn’t shock me, there’s simply too much value with the Blackhawks to pass on. Chicago has played some of their best hockey as of late, and continue to have success on the second half of a back-to-back. Chicago’s also done well in terms of taking a step up in competition. I’ll take a shot with Chicago and the plus money in this one.