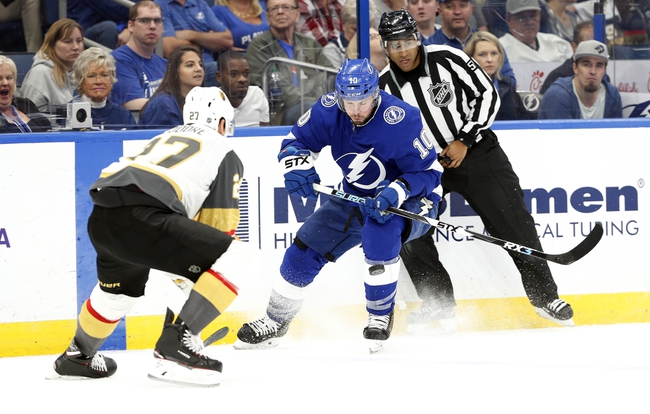 The Vegas Golden Knights and the Tampa Bay Lightning meet in NHL action from the Amalie Arena on Tuesday night.

The Vegas Golden Knights will look to build on back-to-back road wins after a 3-0 win over Nashville last time out. The game was scoreless through the opening 20 minutes before Chandler Stephenson got Vegas on the board just over five minutes into the 2nd period. The 1-0 lead would hold up through the rest of the 2nd and the first half of the 3rd period before Nicolas Roy doubled Vegas’ lead just after the midway point of the 3rd period and Reilly Smith made it 3-0 with an empty-netter with just over a minute to play in the game. Marc-Andre Fleury got the win to improve to 20-12-4 on the year after stopping all 19 shots faced in the winning effort for his 3rd shutout of the season.

The Tampa Bay Lightning will look to add to their current three-game winning streak after a 3-0 win over San Jose in their last outing. The game was tied at zero after the 1st period before Steven Stamkos broke the deadlock just over four minutes into the 2nd period. Stamkos’ goal would hold up through the 2nd and most of the 3rd before Nikita Kucherov doubled the lead with just over two minutes to go. Ondrej Palat would ice the win for the Bolts with just :17 to go, giving the Lightning an insurmountable 3-0 lead. Curtis McElhinney got the win to improve to 6-6-2 on the year after stopping all 30 shots faced for his 1st shutout of the season.

Decent sized plus money with Vegas is tempting most nights, but the problem here is that Tampa Bay is a much better team and the Golden Knights are on game seven of their eight game road trip, so you have to imagine that these guys just want to get it over with and get back home already. Tampa Bay continues to play strong hockey right now and are hard to bet against on home ice. I’ll side with Tampa Bay to get the job done in regulation to bring the price down a little bit.