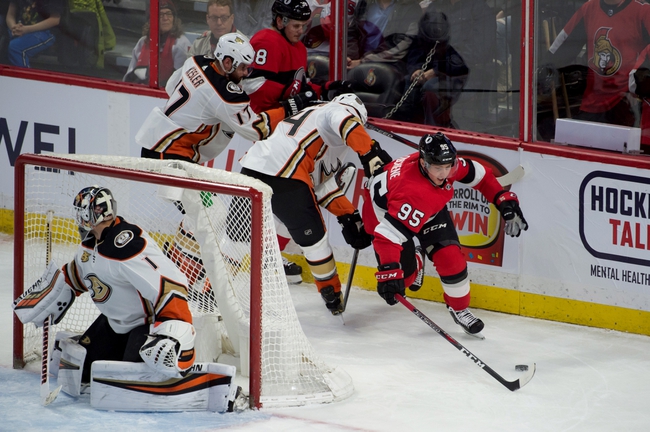 Where to Watch: Prime Ticket Stream live sports and exclusive originals on ESPN+. Sign up now!

The Anaheim Ducks and the Ottawa Senators meet in NHL action from the Canadian Tire Centre on Tuesday night.

The Anaheim Ducks will look to build on a 3-1 win over Los Angeles last time out. Max Jones opened the scoring for Anaheim less than six minutes into the game, and the lead would hold going into the 2nd where Derek Grant doubled the lead 2:33 into the 2nd and Jacob Larsson pushed it to 3-0 just 4:19 later. The Kings would make it 3-1 by getting on the board late in the 2nd, but despite outshooting Anaheim 18-4 in the 3rdperiod alone, the Kings wouldn’t get any closer as Anaheim held on for the road win. Ryan Miller got the win to improve to 6-5-2 on the year after stopping 46 of 47 shots faced in the winning effort.

The Ottawa Senators will look to rebound from a 2-1 overtime loss to Toronto last time out. The game was scoreless through the opening 20 minutes before Mark Borowiecki got the Senators on the board just over six minutes into the 2nd period. Toronto would tie the game at one just after the midway point of the period but the tie would hold through the rest of the 2nd and the 3rd period didn’t produce a winner either so it was off to overtime where the Leafs found the game-winning goals with just over one minute to play in the extra frame. Craig Anderson got the loss to fall to 7-12-2 on the year after allowing both goals on 36 shots faced in the losing effort.

I don’t think I’m trying to get behind either one of these two teams, but if forced to pick, between two teams playing some terrible hockey over the last month or so, I want the team that’s going to give me value. It also doesn’t hurt that the team giving me value has also won twice as many games in their last ten compared to the team laying juice, so I’ll take a shot with Anaheim on the road here.