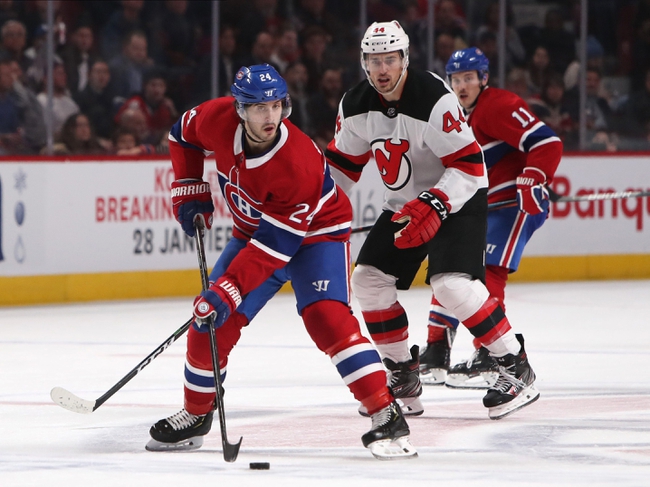 Where to Watch: TSN2, MSG Stream live sports and exclusive originals on ESPN+. Sign up now!

The Montreal Canadiens and the New Jersey Devils meet in NHL action from the Prudential Center on Tuesday night.

The Montreal Canadiens will look to rebound after a 4-3 loss to the Columbus Blue Jackets last time out. Columbus opened the scoring with the lone goal of the opening period before doubling their lead early on in the 2nd period. Tomas Tatar got the Habs on the board just before the midway point of the 2nd period but the Jackets would restore the two-goal cushion late in the middle period. Max Domi cut the deficit to one with just over four minutes to go, but Columbus would add an empty-net goal with just under two minutes to go. Shea Weber would make things interesting with just a minute to play, cutting the deficit to 4-3, but that’s as close as Montreal got as Columbus slammed the door shut the rest of the way. Carey Price took the loss, falling to 22-18-4 on the year after allowing 3 goals on 26 shots faced in the losing effort.

The New Jersey Devils will look to rebound from back-to-back defeats after a 3-2 overtime loss to Dallas last time out. Kevin Rooney opened the scoring for the Devils with the lone goal of the opening period before Dallas tied the game late in the 2nd with the only goal of the middle frame. Dallas took the lead just over five minutes into the 3rd period but Nico Hischier would tie the game at two with just over eight minutes to go. The rest of the 3rd period didn’t produce a winner, so it was off to overtime where Dallas potted the game-winning goal just under two minutes into the extra frame. Louis Domingue took the OT loss, falling to 3-6-1 on the year after stopping 28 of 31 shots faced in the losing effort.

This would be a prime spot for the Habs to maybe get Carey Price an extra game of rest against a New Jersey team that’s not going anywhere anytime soon. However, Price is missing this game anyways because of the flu and being realistic, Montreal still has some hope at salvaging their season, and if the Canadiens want that to happen, they need to take advantage of softer schedule spots like these. I expect either Lingard or Prime to be in goal here, and I expect the Habs to come out in full force. I simply don’t have any faith in the Devils, so I’ll take Montreal on the puck line here to get some decent value out of the bet.