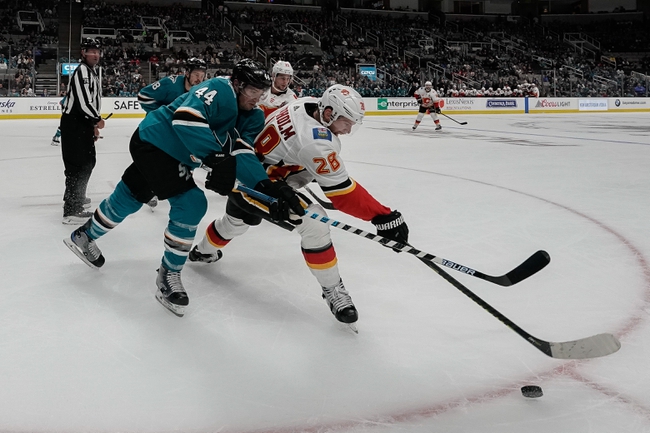 Where to Watch: SN-West, NBCS-California Stream live sports and exclusive originals on ESPN+. Sign up now!

The San Jose Sharks and the Calgary Flames meet in NHL action from the Scotiabank Saddledome on Tuesday night.

The San Jose Sharks will look to rebound after a 3-0 loss to the Tampa Bay Lightning in their last outing. The game was scoreless through the opening 20 minutes before Tampa Bay took the lead just over four minutes into the 2nd period. The 1-0 lead would hold up through the 2nd and most of the 3rd before The Lightning doubled their lead with just over two minutes to go and added an empty-netter to lock up the win in the dying second of the final period. Timo Meier led the Sharks with 6 shots on goal while Brent Burns had 5 shots on target and Stefan Noesen had 4 shots on goal. Aaron Dell took the loss, falling to 9-10-2 on the year after allowing 2 goals on 34 shots faced in the losing effort.

The Calgary Flames will try to rebound from an 8-3 loss to the Edmonton Oilers last time out. Edmonton jumped out to a 2-0 lead just 1:05 into the game before Buddy Robinson got the Flames on the board in the latter stages of the opening period. Edmonton would restore their two-goal lead just 2:51 later and then made it 4-1 just over three minutes into the 2nd period. Matthew Tkachuk made it 4-2 just 1:17 later and Elias Lindholm cut the deficit to 4-3, but that’s as close as the Flames got the rest of the way as Edmonton restored the two-goal cushion again just 1:23 later and added a 6th with just over four minutes to go in the 2nd period. The Oilers tacked on two more goals in the 3rd to put an emphatic stamp on this edition of the battle of Alberta. David Rittich took the loss, falling to 20-13-5 on the year after allowing 6 goals on 28 shots faced in the losing effort.

I think it’s no secret that the Flames are playing the much better hockey right now, but this is a steep price for a Calgary squad that was just beaten down by their rival and laying the puck line doesn’t hold much value as the Flames have covered the puck line in just six of 25 home games this season. The Sharks aren’t playing their best by any stretch, but they’ve had a lot of recent success against Calgary. I think this is a prime spot to take a shot with San Jose and the plus money here.