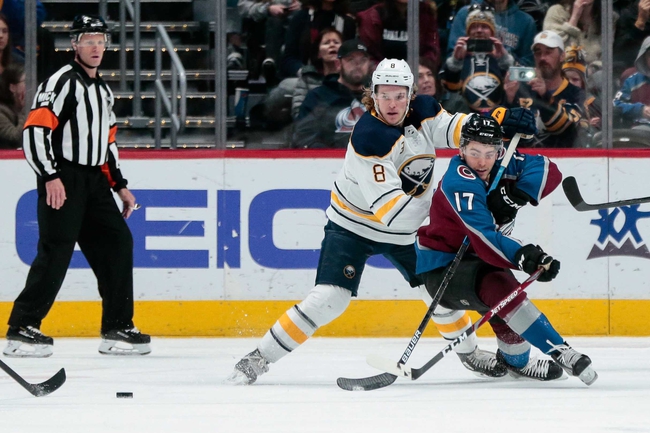 The Colorado Avalanche and the Buffalo Sabres meet in NHL action from the KeyBank Arena on Tuesday night.

The Colorado Avalanche will look to rebound from a 6-3 loss to the Philadelphia Fkyers last time out. Philly jumped out to a 2-0 lead after 20 minutes of play before Nikita Zadorov got the Avs on the board just over two minutes into the 2nd period. Philadelphia would respond just 1:04 later, but Mikko Rantanen made it 3-2 just 1:11 after that, giving us a one-goal game heading into the 3rd. The Flyers made it 4-2 before Andre Burakovsky responded just 1:37 later, but 4-3 was as close as Colorado got the rest of the way as the Flyers added a pair of goals in a span of 2:42 to lock up the victory. Philipp Grubauer took the loss, falling to 14-11-4 on the year after allowing 5 goals on 27 shots faced in the losing effort.

The Buffalo Sabres will look to build on a 2-1 win over Columbus last time out. Evan Rodrigues opened the scoring for the Sabres with just under four minutes to go in the opening period, and the goal would hold up through the 2nd period and the early part of the 3rd before Columbus tied the game at one just 5:45 into the 3rdperiod. The rest of the 3rd period didn’t produce a winner, so it was off to overtime where Jack Eichel found the game winning goal just :36 into the extra period. Carter Hutton got the win to improve to 7-8-4 on the year after stopping 22 of 23 shots faced in the winning effort.

I get that Colorado’s had all of the recent success between the two teams, but these two teams only play twice a year, so it’s hard to give much merit to those head-to-head trends and it’s also hard to use those trends to justify a heavy price tag with a Colorado team that hasn’t been good on the road lately. Buffalo hasn’t been great much either, but the Sabres usually play their best at home and at this price tag Buffalo is at least worth a shot here.