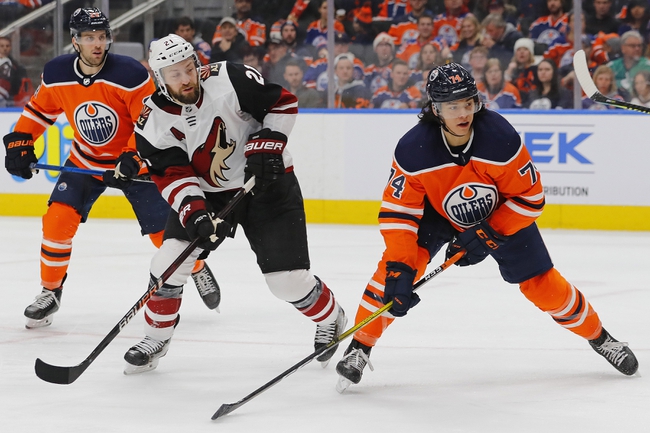 The Edmonton Oilers and the Arizona Coyotes meet in Pacific Division NHL action from the Gila River Arena on Tuesday night.

The Edmonton Oilers will look to build on back-to-back wins after an 8-3 win over the Calgary Flames last time out. Kailer Yamamoto opened the scoring just :29 into the game and Zack Kassian doubled the lead just :36 later. Calgaru got on the board with just over seven minutes to go in the opening period but McDavid would restore the two-goal lead just 2:51 later. McDavid would make it 4-1 just over three minutes into the 2nd period. Calgary would respond just 1:17 later and would cut the deficit to 4-3 just after the midway point of the 2ndperiod. Ryan Nugent-Hopkins would respond for Edmonton just 1:23 later and Caleb Jones would restore Edmonton’s three-goal cushion. Sam Gagner and Gaetan Haas added a pair of late goals for Edmonton in the 3rd for good measure. Mike Smith got the win to improve to 13-9-4 on the year after stopping 15 of 18 shots faced in the winning effort.

The Arizona Coyotes will be out to snap a five-game losing streak after a 3-2 shootout loss to Chicago last time out. Chicago opened the scoring with the lone goal of the opening period and doubled their lead early in the 2nd period before Brad Richardson pulled a goal back just before the nine minute mark of the 2nd period and Conor Garland tied the game at two in the latter stages of the 2nd period. The 3rd period didn’t produce a winner and neither did OT, so it was off to the shootout where Chicago scored on both of their attempts while Arizona missed both of theirs, giving Chicago the win and the extra point that goes along with it. Antti Raanta took the loss, falling to 9-11-3 on the year after stopping 42 of 44 shots faced in the losing effort.

I wish I could say this line makes sense, but it really doesn’t to me. I’m not laying juice with a Coyotes team that’s slumping and has lost 5 straight coming into this game against an Oilers team that’s playing much better hockey and has had the upper hand on Arizona in recent years. I’ll gladly take Edmonton and the plus money here as well as put a little bit on the Oilers on the reverse puck line for nearly three times my money.