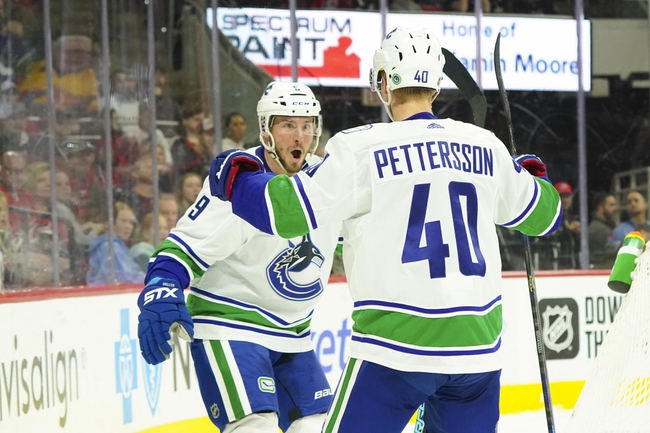 The NHL hiatus we like to call “The All-Star Break” has ended and regular season play resumed this past week. Let us take a look at how the Power Rankings have altered.

Washington lost to the Predators and Penguins but was able to pick up the easy dub against the Senators. They remain the toughest team in the league.

Boston got off on the right foot after the break, winning two road games against Western Conference clubs.

The Pens took care of business against two Metro foes, the Flyers, and the Capitals. They are coming around the corner for first place in the division.

Tampa has had the luxury of having a weak schedule to start the second half, but they got done what they needed and are back on a three-game win streak.

The Blues have lost three of four to start the second half of the season, but are still in a great spot.

Vancouver has won five straight as they are one of the biggest jumpers on this list. Rookie Quinn Hughes has played fantastic as of late.

Columbus has now jumped the Islanders for third place in the Metropolitan division, albeit they have played three more games than NYI.

The Islanders lost to Vancouver in OT in a game where they were lucky to get a point. The Isles will look to get back on track in their next few games.

Toronto is starting to heat up now after winning three straight games. The offense has played well naturally, but the defense has been surprisingly positive lately as well.

A loss and a shootout win for Carolina this week. They are right behind the Islanders and tied with Philadelphia in the Metro.

The Flyers have gotten three points in their first two games back from the All-Star weekend. They, like many other teams in the Metro, are right in it.

Colorado lost to Philadelphia badly, 6-3 on the road to start the second half of the season. Any loss is bound to hurt a team immensely this season, and this one did for Colorado.

Two wins and a shootout loss for Edmonton and the Oilers are climbing the standings in the Pacific.

Two overtimes wins and a loss to Toronto has been the start for Dallas after the break. They now have the Rangers and Islanders on the road ahead of them.

A much-needed good start for the Knights was granted as Vegas pulled out two road wins this past week.

Florida was blanked 4-0 in their only game of the week, therefore they take a huge fall in the power rankings.

A shootout win and loss, matched with an ugly 8-3 smackdown loss sum up the week for Calgary.

Chicago took down Arizona in their only game this week, so it is only fair that they jump the Yotes in the power rankings. What an amazing shootout goal by Patrick Kane!

Arizona has lost five in a row now, although in the last two they were able to secure a point. They need to figure it out fast or the season will pass them by.

A loss to Boston but a win over St. Louis make this a positive week for Winnipeg in a season where there have not been too many positives.

The Rangers swept the home-and-home against the despicable Red Wings to pick up two… wins, a win is a win I guess.

The Predators defeated Washington and New Jersey but were shutout by the Golden Knights at home this week.

Two wins, two losses, for Montreal. Carey Price has been playing in many games recently, so at least he is feeling 100%.

Two losses were followed by a beautiful overtime winner by Jack Eichel and Buffalo.

The Wild lost at home to the Bruins 6-1 in their only game this past week. Any loss at home by that kind of score will leave a very bad taste in your mouth.

They took care of Anaheim but were outplayed badly by Vancouver and Tampa Bay not soon after. What a sad year for San Jose.

Quack! Quack! The Ducks were busy this week with four games, two of which they won, and two they lost. Fun fact, a team has scored exactly four goals in six of the Duck’s last eight games.

Four points for New Jersey this past week even though they only won one game. They have now lost nine games in overtime/shootout which is a rather high total.

Ottawa also collected four points this week while only winning a single game. They should be the biggest sellers at the trade deadline.

An overtime win over Arizona and two regulation losses to Anaheim and Tampa Bay were the results of the past week for LAK.

The Red Wings are projected about 43 points this season, but who needs points in the standings when you are in the Motor City baby!