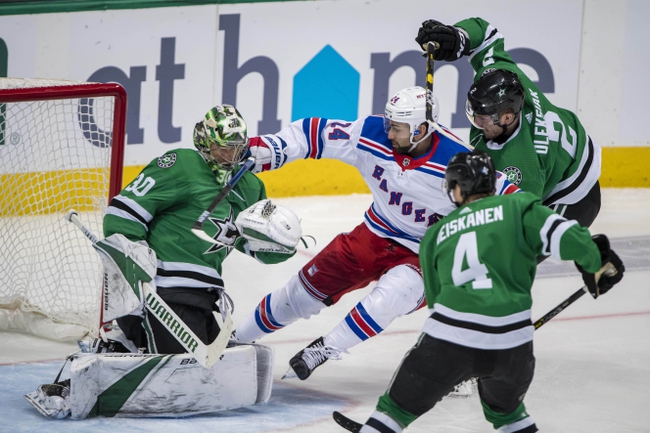 Where to Watch: FS-West+, MSG+ Stream live sports and exclusive originals on ESPN+. Sign up now!

The Dallas Stars and the New York Rangers meet in NHL action from Madison Square Garden on Monday night.

The Dallas Stars will look to build on a 3-2 overtime win over New Jersey in their last outing. New Jersey opened the scoring with the lone goal of the opening period before Jason Dickinson tied the game with the lone goal of the middle period coming with just over a minute to go in the period. Joel Kiviranta gave Dallas the lead just over five minutes into the 3rd but the Devils would tie the game at two with just over eight minutes to go. The rest of the 3rd couldn’t produce a winner, so it was off to overtime where Joe Pavelski gave Dallas the win just under two minutes into the extra period. Ben Bishop got the win to improve to 18-11-3 on the year after stopping 29 of 31 shots faced in the winning effort.

The New York Rangers will look to win on back-to-back wins over the Detroit Red Wings with a 1-0 win last time out. Mika Zibanejad opened the scoring with the lone goal of the game with just over eight minutes to go in the 1st period. The Rangers were outshot 33-31 in the game, but ultimately slammed the door shut on any comeback attempt by Detroit as the Rangers rode the lone goal to victory. Jacob Trouba led New York with 5 shots on goal while Artemi Panarin and the aforementioned Zibanejad each had 4 shots on goal in the winning effort. Henrik Lundqvist got the win to improve to 10-10-3 on the year after stopping all 33 shots faced in the winning effort for his 1st shutout of the season.

The plus money with New York at home is tempting, but a pair of back-to-back wins over a brutal Detroit team doesn’t really do much for me if we’re being honest. Dallas is still one of the NHL’s best right now, and the fact that the Stars are favored on the road just speaks to that in my opinion. I just think the Stars are the better team here, so I’ll lay the juice with Dallas on the road in this one.

Get Premium Picks Start Winning Now »
The pick in this article is the opinion of the writer, not a PickDawgz site consensus.
Previous Pick
NHL Power Rankings - All 31 Teams: 2/3/20
Next Pick
Detroit Red Wings vs. Philadelphia Flyers - 2/3/20 NHL Pick, Odds, and Prediction