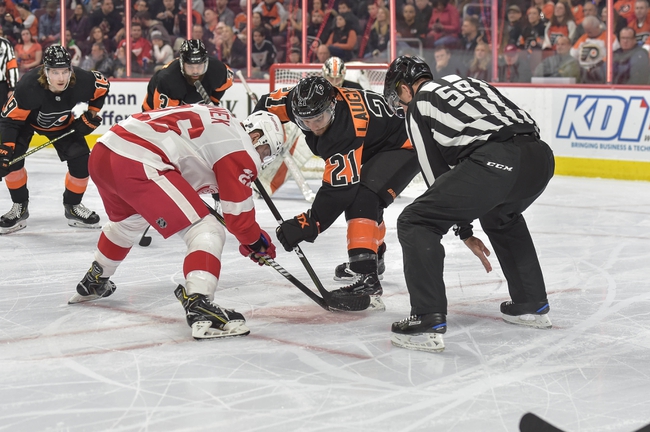 The Philadelphia Flyers and the Detroit Red Wings meet in NHL action from Little Caesars Arena on Monday night.

The Philadelphia Flyers will look to build some momentum after a 6-3 win over Coolorado in their last outing. Matt Niskanen and Kevin Hayes staked the Flyers a 2-0 lead by the end of the 1st period before Colorado got on the board just over two minutes into the 2nd. Joel Farabee responded just 1:04 later but Colorado would pull another goal back just 1:11 later. The 3-2 score would hold going into the 3rd where Farabee restored the two-goal lead with his 2nd goal of the game. Colorado responded just 1:37 later, but the Flyers would slam the door shut with a pair of late goals 2:42 apart to lock up the win. Alex Lyon got the win to improve to 1-1-0 on the year after stopping 28 of 31 shots faced in the winning effort.

The Detroit Red Wings will look to snap an eight-game losing streak after a 1-0 loss to the New York Rangers last time out. The Rangers took the lead with the lone goal of the opening period and despite the Red Wings putting up 11 shots in each period and outshooting the Rangers 33-31 in the game, the Wings wouldn’t be able to break through and find the back of New York’s net in the losing effort. Dylan Larkin led the Wings with 5 shots on goal while Dylan Larkin had 4 shots on goal in the losing effort. Jonathan Bernier took the loss, falling to 10-13-2 on the year after allowing the game’s lone goal on 31 shots faced in the losing effort.

The plus money with Detroit would be tempting as Philly isn’t the same team on the road teat they’ve been at home this season. However, Detroit is still the same terrible team that they’ve been all season long, and the Wings could be on the way for their 3rd double-digit losing streak of the season. The Wings just provide no value and taking continuous shots in the hopes that maybe you’ll catch the plus money is starting to not be worth the hassle. I’ll side with the Flyers here and to cut down the heavy juice, give me Philadelphia on the puck line.