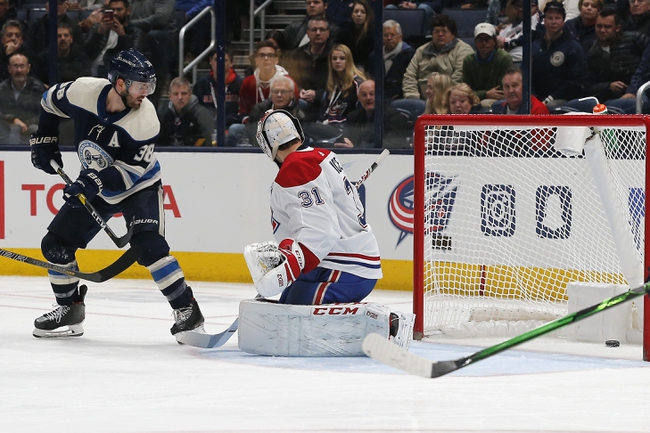 Where to Watch: Sportsnet One, SN-East, SN-Ontario, TVA, FS-Ohio Stream live sports and exclusive originals on ESPN+. Sign up now!

The Columbus Blue Jackets and the Montreal Canadiens meet in NHL action from the Bell Centre on Sunday afternoon.

The Columbus Blue Jackets will look to rebound from a 2-1 overtime loss to Buffalo last time out. Buffalo opened the scoring with the lone goal of the opening period with 3:52 to go in the 1st, and the Sabres would hold that lead through the 2nd and into the 3rd before Oliver Bjorkstrand tied the game at one for Columbus less than six minutes into the 3rd period. The rest of the 3rd wouldn’t produce a winner on either side, so it was off to overtime where the Sabres found the game-winning goal just :36 into the extra frame. Matiss Kivienieks took the OT loss, falling to 1-0-1 on the year after stopping 22 of 24 shots faced in the losing effort.

The Montreal Canadiens will look to build on back-to-back wins after a 4-0 win over Florida last time out. Nick Suzuki opened the scoring for the Habs just over five minutes into the game before Artturi Lehkonen doubled the lead six minutes into the 2nd period and Tomas Tatar pushed Montreal’s lead to 3-0 by the end of the 2ndperiod. Brendan Gallagher added a 4th goal for Montreal just after the midway point of the 3rd to give the Habs an already insurmountable lead that they would ride to the finish line. Carey Price got the win to improve to 22-17-4 on the year after stopping all 29 shots faced in the winning effort for his 3rd shutout of the season.

The plus money with Columbus is tempting as the Blue Jackets have been playing better hockey between the two over the last month or so, but the problem I have is that the Blue Jackets don’t have a ton of top-tier talent in goal right now, and that was with Korpisalo when he was healthy. Montreal has come out of the all-star break strong, and while it’s hard to go on a back-to-back, it tends to be easier when both games are at home and you get to sleep in your own bed. I’ll lay the juice with Montreal in this one.

Get Premium Picks Start Winning Now »
The pick in this article is the opinion of the writer, not a PickDawgz site consensus.
Previous Pick
Washington Capitals vs. Pittsburgh Penguins - 2/2/20 NHL Pick, Odds, and Prediction
Next Pick
NHL Power Rankings - All 31 Teams: 2/3/20