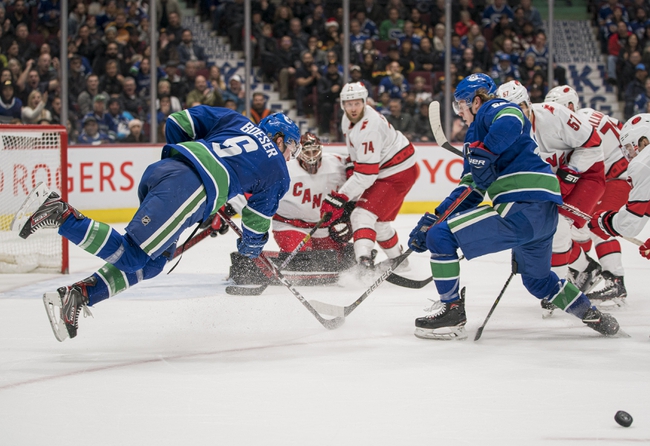 Where to Watch: FSCR, RSNP Stream live sports and exclusive originals on ESPN+. Sign up now!

The Vancouver Canucks and Carolina Hurricanes meet Sunday in NHL action at the PNC Arena.

The Vancouver Canucks have won six of the last 10 meetings against the Hurricanes, but this is a tough schedule spot for them when you consider they're on the end of a back to back and playing back-to-back road games with easy starts. It also doesn't help that yesterday's game against the Islanders went into overtime. We're sure to see some tired legs from the Vancouver Canucks, a team that's had issues on the end of a back to back to begin with. The Carolina Hurricanes are well rested and one of the more consistent home teams in the league. Give me the Canes at home.

Get Premium Picks Start Winning Now »
The pick in this article is the opinion of the writer, not a PickDawgz site consensus.
Previous Pick
Washington Capitals vs. Pittsburgh Penguins - 2/2/20 NHL Pick, Odds, and Prediction
Next Pick
NHL Power Rankings - All 31 Teams: 2/3/20