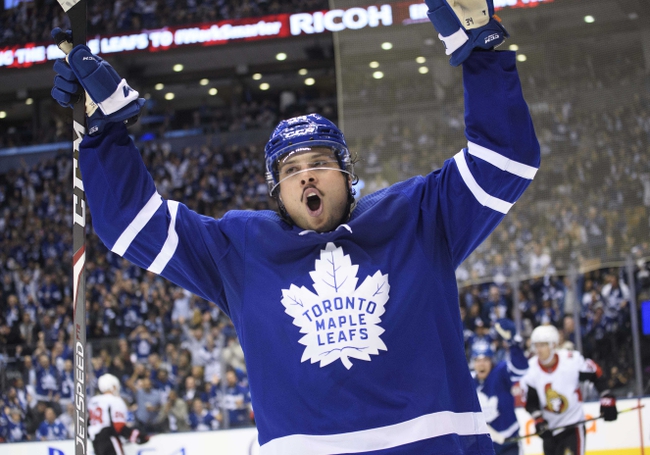 The Ottawa Senators and the Toronto Maple Leafs meet in another instalment of the Battle of Ontario in NHL action from Scotiabank Arena on Saturday night.

The Ottawa Senators will look to rebound from a 5-3 loss to Washington in their last outing. Washington stormed out to a 2-0 lead by the end of the opening period before Chris Tierney got the Senators on the board early on in the 2nd. Washington responded just 3:12 later but Thomas Chabot would pull another goal back for Ottawa just 1:04 later. Washington restored the two-goal lead just over three minutes into the 3rd, but once again, the Senators would have an answer just 1:40 later as Artem Anisimov pulled a goal back. Despite the Senators’ best efforts, Ottawa wouldn’t get any closer as Washington iced the game with an empty-netter with just :15 to go, sending Ottawa back empty-handed. Marcus Hogberg took the loss, falling to 2-3-6 on the year after allowing 4 goals on 36 shots faced in the losing effort.

The Toronto Maple Leafs will look to build on a 5-3 win over Dallas last time out. Auston Matthews opened the scoring for Toronto just after the midway point of the 1st period before Dallas responded with just 2:39 to go in the opening frame. Zach Hyman restored Toronto’s lead and Tyson Barrie pushed the Leafs up 3-1 before Dallas responded in the last minute of the 2nd period. William Nylander restored the two-goal cushion but the Stars responded again just 2:58 later, but 4-3 was as close as Dallas would get as Andreas Johnsson potted an empty-netter to give the Leafs a huge road win. Frederik Andersen got the win to improve to 24-9-6 on the year after stopping 31 of 34 shots faced in the winning effort.

The plus money with the Senators is kind of tempting as Ottawa’s just stepped their game up when big brother is on the other side. The problem here is that the Senators have just been flat over the last few weeks, while Toronto is really starting to ramp up their play and are starting to show signs of tightening things up defensively. I just don’t think Ottawa keeps pace here, so I’ll side with Toronto and to get the price down, I’ll take the Leafs on the puck line here.