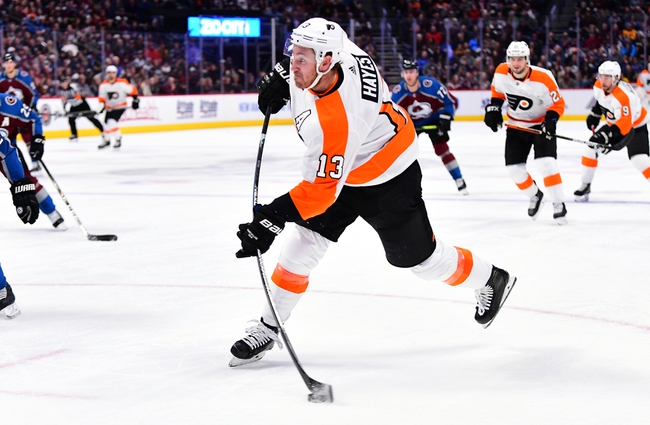 The Colorado Avalanche and the Philadelphia Flyers meet in NHL action from the Wells Fargo Center on Saturday night.

The Colorado Avalanche will look to carry over their momentum from the first half of the all-star break after making it 3 straight wins with a 6-3 win over Detroit last time out. Detroit opened the scoring just 2:28 into the game and the Red Wings would hold that lead going into the 2nd where Nazem Kadri and Nathan MacKinnon scored 1:54 apart to give the Avs a 2-1 lead less than three minutes into the 2nd. Colorado carries their lead into the 3rd where Kadri would score his 2nd of the game and Matt Nieto would score :53 later to push the Avs’ lead to 4-1. Detroit pulled a goal back just 1:50 later but Ryan Graves would respond with just over six minutes to go in the game. Detroit made things interesting at 5-3 with just 2:03 to go, but MacKinnon would ice Colorado’s win with an empty-net goal with just a minute to play. Pavel Francouz got the win to improve to 12-4-2 on the year after stopping 22 of 25 shots faced in the winning effort.

The Philadelphia Flyers will look to rebound from a 4-3 overtime loss to Pittsburgh last time out. Jakub Voracek gave the Flyers the lead with just :29 to go in the opening period but the Pens would storm back in the 2nd, taking a 3-1 lead just after the midway point of the 2nd period. Tyler Pitlick pulled a goal back late in the 2ndand Scott Laughton tied the game at three just over two minutes into the 3rd period. The rest of regulation didn’t produce a winner, so it was off to overtime where the Penguins buried the game winning goal in the first minute of extra hockey. Brian Elliott took the loss, falling to 12-5-4 on the year after allowing all 4 goals on 20 shots faced in the losing effort.

I get why a low line and Philadelphia at home would be tempting as at home is where the Flyers have done a ton of their best work this season. However, the Flyers haven’t been great on the second half of a back-to-back and while there could be some rust concern with the Avalanche, the fact is that Colorado is the team in better form coming into this one and I just think that the Avs will be itching to get out there and take advantage of a tired Philadelphia team. Give me Colorado in this one.