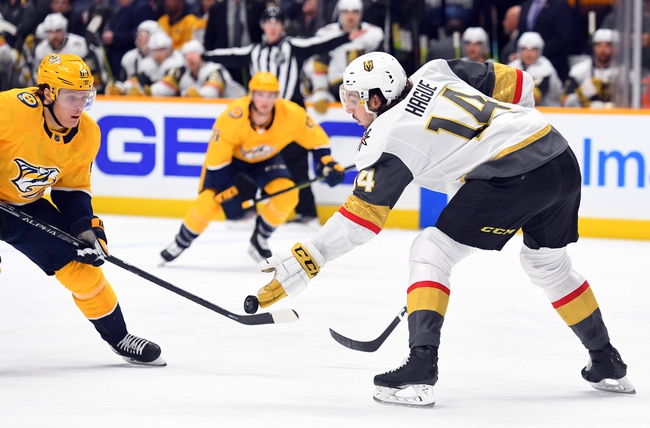 The Vegas Golden Knights and the Nashville Predators meet in NHL action from the Bridgestone Arena on Saturday night.

The Vegas Golden Knights will look to build on a 4-3 win over Carolina in their last outing. Paul Stastny opened the scoring just 3:52 into the game before Jonathan Marchessault doubled the lead just before the midway point of the opening period. Carolina pulled a goal back with the lone goal of the second period but Nate Schmidt would restore the two-goal cushion with just under eight minutes to go. Carolina would respond just :16 later, and would tie the game with just under four minutes to play, but Alex Tuch would break that deadlock with the eventual game-winner with just 2:28 to go in the game. Malcolm Subban got the win to improve to 7-7-3 on the year after stopping 22 of 25 shots faced in the winning effort.

The Nashville Predators will look to build on back-to-back wins after a 6-5 shootout win over New Jersey last time out. Mattias Ekholm opened the scoring for the Preds just :42 into the game before New Jersey tied the game at one just before the five minute mark of the period. Filip Forsberg restored the lead just 3:23 after that and the Predators would carry that lead into the 2nd. New Jersey struck twice in a span of 1:42 to go up 3-2 before Nick Bonino tied the game at three for Nashville just 2:22 later. The Devils would restore the lead just before the end of the 2nd but Matt Duchene would tie the game again just :33 into the 3rd. The Devils would take another lead at 5-4, but Forsberg would equalize again for Nashville with his 2nd goal of the game just before the halfway point of the final period. The rest of regulation solved nothing, and neither did OT, so it was off to the shootout where Nashville scored on 2 of their 3 attempts while New Jersey missed 2 of their 3, giving the Predators the win and the extra point that goes along with it. Pekka Rinne got the win to improve to 17-11-3 on the year after stopping 27 of 32 shots faced in the winning effort.

I get Nashville being favored at home, but I’m still not solid on the Predators as a whole lately. I mean sure, the Predators are playing better than Vegas has been lately, but the Preds also just gave up 5 goals to a New Jersey team that hasn’t been very good for much of the season. Vegas got the win with Subban in net on Friday, and the Golden Knights have won 4 of their last 5 games on the second half of a back-to-back and getting Fleury in goal for that game will be a huge boost for Vegas. I’ll take a shot with Vegas and the plus money in this one.