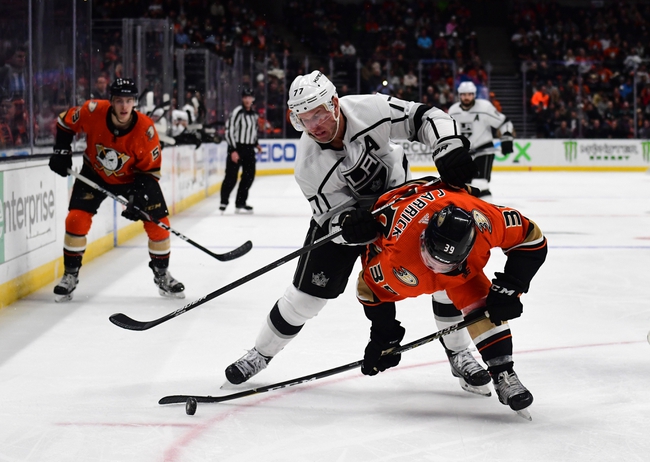 The Anaheim Ducks and the Los Angeles Kings meet in a Pacific division matchup in NHL action from the Staples Center on Saturday night.

The Anaheim Ducks will look to rebound after a 4-3 loss to the Tampa Bay Lightning last time out. Tampa Bay took the lead just over four minutes into the game before Rickard Rakell got the Ducks on the board just 4:35 later. The Bolts would take another lead before Michael Del Zotto tied the game at two with just over a minute and a half to play in the opening period. Tampa surged ahead again with the lone goal of the 2nd period and went up 4-2 just after the midway point of the 3rd period but Troy Terry would make things interesting late, cutting the deficit to 4-3 with just :13 to play, but ultimately it wasn’t enough as Tampa Bay held on for the win. John Gibson took the loss, falling to 15-21-3 on the year after allowing 4 goals on 22 shots faced in the losing effort.

The Los Angeles Kings will look to build on a 3-2 OT win over Arizona last time out. Alex Iafallo opened the scoring for the Kings with the lone goal of the opening period before Arizona tied the game at one just after the midway point of the 2nd period and the Coyotes would follow that up by taking a 2-1 lead in the last minute of the 2nd period. The Kings looked headed for yet another road loss before Iafallo tied the game with just 2:54 to go with his second tally of the game to force OT, and Iafallo would complete the hat-trick with the game-winning goal just :24 into overtime. Jack Campbell got the win to improve to 8-10-2 on the year after stopping 26 of 28 shots faced in the winning effort.

These rivalry games can be tricky, especially when the teams aren’t very good like these two are, as both sides don’t have much to get up for except for these kinds of games. However, Anaheim continues to provide little value wherever they play, and while the Kings have struggled on the road, Los Angeles did get a key road win last time out and play their best hockey at home this year, so I’ll lay the juice with the Kings at home in this one.