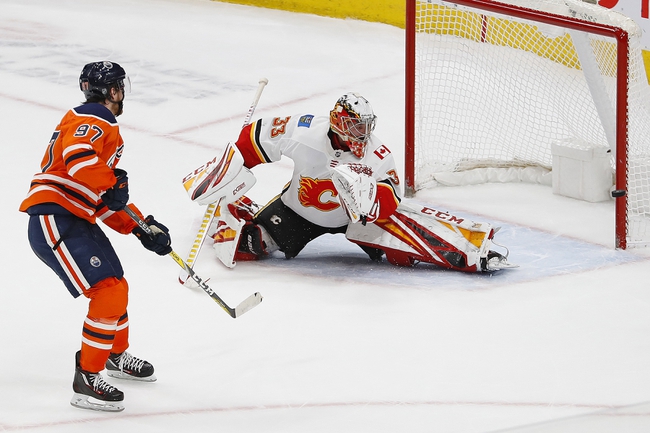 The Edmonton Oilers and the Calgary Flames meet in another instalment of the Battle of Alberta in Pacific division NHL action from the Scotiabank Saddledome on Saturday night.

The Edmonton Oilers come into this game looking to build on a 4-2 win over the St. Louis Blues last time out. Leon Draisaitl and Caleb Jones staked the Oilers an early 2-0 lead with a pair of goals :17 apart and would carry that lead into the 2nd where St. Louis would pull a goal back with the lone goal of the 2nd period and would tie the game just 2:12 into the 3rd frame. Draisaitl would restore Edmonton’s lead with his 2nd goal of the game just two minutes later and despite being outshot 16-13 in the 3rd, the Oilers would ice the win with an empty-net goal from Josh Archibald to pick up the two points. Mikko Koskinen got the win to improve to 15-9-2 on the year after stopping 30 of 32 shots faced in the winning effort.

The Calgary Flames will look to log back-to-back wins over the Oilers after a 4-3 shootout win last time out. Elias Lindholm opened the scoring for the Flames just over a minute into the game and the Flames would ride the lead into the 2nd but Edmonton would tie things up at one just under six minutes into the 2nd period. Anthony Mangiapane gave Calgary a 2-1 lead later in the frame but the Oilers would respond again just 1:36 after that. Mangiapane scored again, with just :45 to go in the second period to give Calgary a 3-2 lead heading to the 3rd. Edmonton would tie the game at three with just over eight minutes to go, and neither side would produce a winner in the rest of regulation, or overtime for that matter, so it was off to the shootout. Sean Monahan scored the lone goal out of all 5 shooters combined for both sides, giving Calgary the win and the extra point that goes with it. David Rittich got the win to improve to 20-12-6 on the year after stopping 31 of 34 shots faced in the winning effort.

This should be another great game just like the one was a few nights ago between these two. However, Edmonton’s historically been pretty bad on the second half of a back-to-back, and clawing out a win over the defending champions and then having to play an in-province rival on a back-to-back is not a good spot to be in. Calgary has stepped up their play lately, and I just think that the Flames get the job done here and to get the price down, I’ll side with the Flames in regulation.