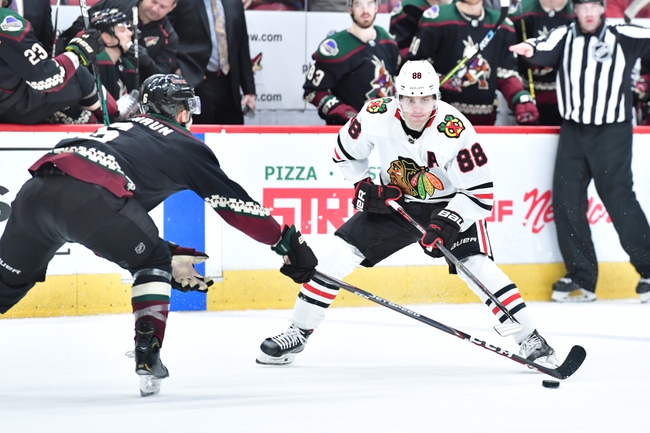 The Chicago Blackhawks and the Arizona Coyotes meet in NHL action from the Gila River Arena on Saturday night.

The Chicago Blackhawks come into this one looking to rebound from a 4-3 loss to Florida in their last outing. The game was scoreless through the opening 20 minutes before Florida took a quick 2-0 lead with a pair of goals 1:31 apart and a 3-0 lead just after the midway point of the 2nd period. Kirby Dach got the Blackhawks on the board just 3:29 later, but the Panthers would restore the three-goal lead in the dying seconds of the middle frame. Drake Caggiula pulled a goal back four minutes into the 3rd and Patrick Kane made things interesting at 4-3 with just over a minute to go, but it wasn’t enough as Florida held on for the win. Robin Lehner took the loss, falling to 15-8-4 on the year after allowing 4 goals on 26 shots faced in the losing effort.

The Arizona Coyotes will be out to snap a four-game losing streak after a 3-2 overtime loss to the Los Angeles Kings in their last outing. The Kings opened the scoring with the lone goal of the opening period and would hold the lead for a good chunk of the 2nd period before Nick Schmaltz tied the game at one for the Coyotes and Christian Dvorak gave Arizona a 2-1 lead with just over a minute to go in the middle period. The Coyotes almost held on for the win but Los Angeles would tie the game at two with just under three minutes to go, forcing OT where the Kings found the winner just :24 into the extra period, adding to Arizona’s losing skid. Adin Hill took the OT loss, falling to 2-2-2 on the year after allowing all 3 goals on 37 shots faced in the losing effort.

I understand favoring the Coyotes at home if Arizona had been playing well there to begin with but all season long, Arizona’s done their best work on the road. We’re also getting decent sized plus money to fade Arizona who has lost 4 straight, and backing a Chicago team that’s pushed themselves right back into the playoff hunt over the last month and a half. I’l take my chances with the team playing better hockey at plus money, and that’s Chicago.