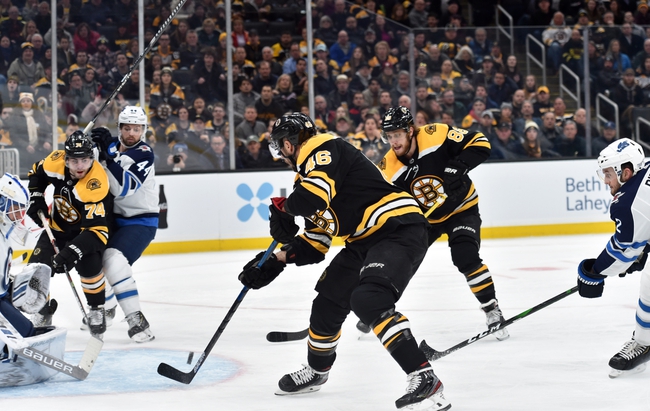 The Boston Bruins and the Winnipeg Jets meet in NHL action from Bell MTS Place on Friday night.

The Boston Bruins will look to build on a 3-2 win over Vegas last time out. Vegas opened the scoring just over a minute into the game before Jeremy Lauzon tied the game at one for Boston just after the midway point of the opening period. Vegas would re-take the lead with the lone goal of the 2nd period but Jake DeBrusk would tie the game at two early on in the 3rd and David Krejci would give the Bruins the lead for good with just under eight minutes to go as Boston would hold on for the victory. Jaroslav Halak got the win to improve to 12-6-6 on the year after stopping 27 of 29 shots faced in the winning effort.

The Winnipeg Jets will be out to snap a four-game losing streak after a 4-3 loss to Columbus last time out. Mason Appleton opened the scoring for Winnipeg just under five minutes into the game before Columbus tied the game at one just 1:28 later. Kyle Connor helped Winnipeg take the lead again late in the 1st before Columbus tied things up again early in the 2nd. Neal Pionk gave the Jets a 3-2 lead with just 4:27 to go in the 2nd, but the Blue Jackets would tie the game again just 2:22 later, sending us to the 3rd tied at three. Columbus took the lead for good late in the 3rd despite Winnipeg outshooting the Blue Jackets 13-10 in the 3rd.

I was tempted by Winnipeg and the plus money as maybe the all-star break helped the Jets clear their heads and come into this game focused on breaking out of the schneid. However, Boston is still a really good team, and isn’t the kind of team I’d want to have to take on right out of the gate to try to break out of that skid. I just think at this point, Boston is the better team, so I’ll side with the Bruins in regulation to get a more favorable price.