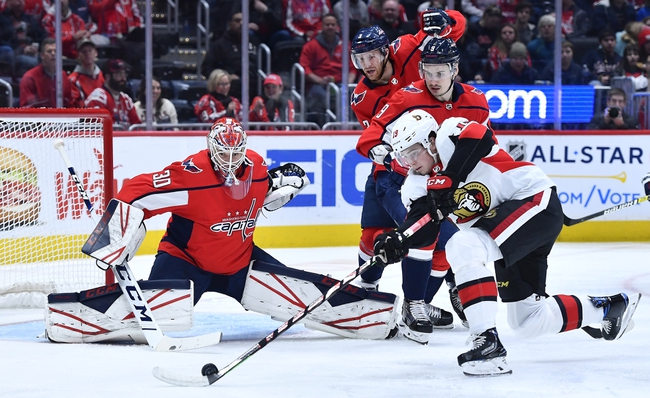 The Washington Capitals and the Ottawa Senators meet in NHL action from the Canadian Tire Center on Friday night.

The Washington Capitals will look to rebound after a 5-4 loss to the Nashville Predators in their last outing. Richard Panik opened the scoring for the Capitals just before the midway point of the opening period, but Nashville would tie the game just :47 later, and take the lead just 2:37 after that. The Predators would add a 3rd goal just 3:10 later but Alex Ovechkin would have a response to make it 3-2 just :24 after Nashville’s 3rd. Panik would score his 2nd of the game just over six minutes into the 2nd to tie the game and Tom Wilson buried to make it 4-3 just after the halfway point of the middle period. Nashville would tie the game three minutes into the 3rd and would take the lead for good with just over four minutes to go as Washington couldn’t muster up any offense in the 3rd, being held goalless as well as putting just 4 shots on goal. Braden Holtby took the loss, falling to 19-10-4 on the year after allowing all 5 goals on 24 shots faced in the losing effort.

The Ottawa Senators will look to build on a 5-2 win over Buffalo last time out. Jean-Gabriel Pageau opened the scoring just under four minutes into the game before Buffalo tied the game at one later in the opening frame. Tyler Ennis gave Ottawa the lead again just under five minutes into the period but the Sabres would answer again just under four minutes later. The tie would hold going into the 3rd where Mike Reilly gave the Sens the lead just under nine minutes into the period. Mark Borowiecki and Nikita Zaitsev scored empty-netters just two minutes apart to lock up the win for Ottawa at the final horn. Craig Anderson got the win to improve to 7-12-1 on the year after stopping 28 of 30 shots faced in the winning effort.

Ottawa getting plus money at home is kind of tempting as that’s where the Senators have done their best work, and the Senators answered the bell on the road against Buffalo. However, Washington’s also done their best work this season on the road, and the Caps have gone 18-8 against the puck line on the road this season. I just think this is a bounce back spot for the Capitals here, so I’ll take Washington on the puck line to get the price down.