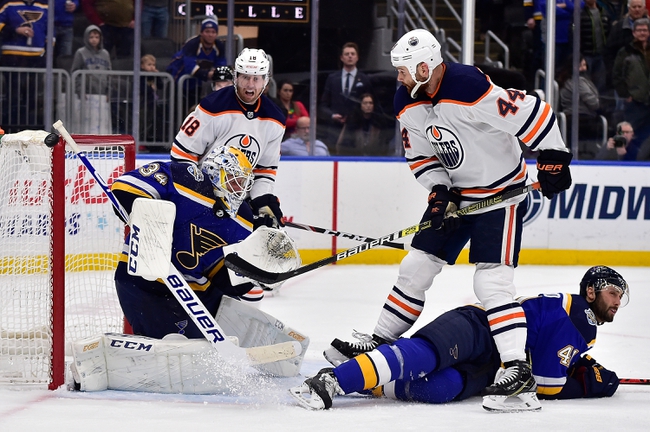 The St. Louis Blues and the Edmonton Oilers meet in NHL action from Rogers Place on Friday night.

The St. Louis Blues will look to build on a 5-4 shootout win over Calgary in their last outing. Alex Steen opened the scoring for the Blues just under six minutes into the game but Calgary would tie the game at one just after the midway point of the period and would take the lead just over five minutes later. David Perron would equalize for the Blues with just over a minute to go in the opening period and Jaden Schwartz would give the Blues the lead again just :44 later. The Flames would tie the game and take a 4-3 lead 5:07 apart in the 2ndperiod before Zach Sanford tied the game at four in the first minute of the 3rd. The rest of the 3rd wouldn’t produce a winner, and neither did overtime, so it was off to the shootout where St. Louis converted both of their chances while Calgary missed the mark on both of theirs, giving the Blues the win and the extra point. Jordan Binnington got the win to improve to 23-8-5 on the year after stopping 27 of 31 shots faced in the winning effort.

The Edmonton Oilers will look to rebound after a 4-3 shootout loss to the same Calgary Flames in their last outing. Calgary took the lead just over a minute into the game and the lead would hold going into the 2ndwhere Kailer Yamamoto tied the game just under six minutes into the 2nd period. Calgary re-took the lead but Alex Chiasson tied the game at two just 1:36 later. The Flames took the lead again in the last minute of the 2ndframe but Matt Benning would tie the game at three with just over eight minutes to play. The rest of the 3rddidn’t give us a winner, neither did OT, so it was  off to the shootout where Calgary scored the lone goal out of all 5 combined shooters to give the Flames the win and the extra point. Mike Smith took the loss, falling to 12-9-4 on the year after allowing 3 goals on 28 shots faced in regulation and OT.

The plus money with Edmonton at home is tempting, especially since the Oilers have stepped up their play recently. However, the Blues have been playing lights out pretty much all season long, and they’re almost a must play whenever you get them at a low line like what we have here. It also doesn’t hurt that the Blues have owned the Oilers over the years, so I’ll lay the juice with St. Louis in this spot.