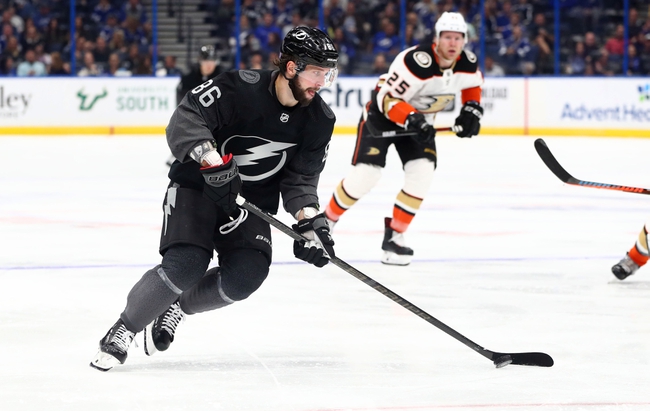 The Tampa Bay Lightning and the Anaheim Ducks meet in NHL action from the Honda Center on Friday night.

The Tampa Bay Lightning will look to build some steam going forward after a 4-2 win over Los Angeles in their last outing. Los Angeles opened the scoring with the lone goal of the opening period before doubling the lead early on in the 2nd period. Tyler Johnson got the Bolts on the board four and a half minutes later and Steven Stamkos tied the game at two with just over eight minutes to go in the 2nd period. The tie would hold going into the 3rd where Erik Cernak would give the Lightning the lead just over four minutes into the 3rd and despite the Kings’ best efforts, Los Angeles wouldn’t find a game-tying goal before Steven Stamkos potted an empty-netter to give the Lightning the dagger with the 4th goal of the game. Andrei Vasilevskiy got the win to improve to 25-9-3 after stopping 32 of 34 shots faced in the winning effort.

The Anaheim Ducks will look to build some steam of their own after a 4-2 win over Arizona in their last outing. Adam Henrique opened the scoring just under six minutes into the game before Arizona tied the game at one just a minute and a half later. Henrique gave the Ducks the lead again with just under four minutes to go in the opening frame before Hampus Lindholm pushed the Ducks ahead 3-1 early on in the 2nd period. The Coyotes pulled one back later in the 2nd but Carter Rowney would restore the two-goal cushion in the final minute of the 2nd period. The 4-2 score line would hold up until the final horn giving the Ducks a much-needed victory. John Gibson got the win to improve to 15-20-3 on the year after stopping 25 of 27 shots faced in the winning effort.

Anaheim, like a lot of NHL teams, do their best work at home, so the plus money could be tempting. However, the Ducks are also providing little value as an underdog, and this is a team that’s won back-to-back games just once since the beginning of November. The Lightning are starting a serious push for the division lead and I think the Bolts get one more step closer with a win here, and to cut down the heavy juice, I’ll side with Tampa Bay on the puck line here.