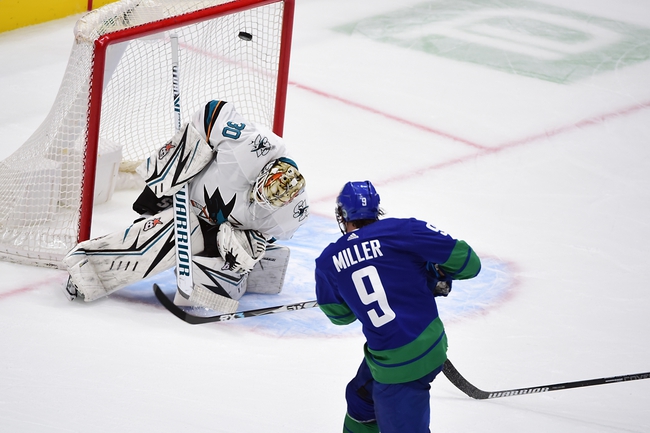 The Vancouver Canucks and the San Jose Sharks meet in a Pacific division matchup in NHL action from the SAP Center on Wednesday night.

The Vancouver Canucks will look to add to their current three-game winning streak after a 3-1 win over St. Louis last time out. St. Louis took the lead just over three minutes into the game before J.T. Miller struck twice in just under nine minutes apart in the 2nd period. The lead would hold up through the 2nd and pretty much all of the 3rd before the Canucks added an empty net goal with just one second to play thanks to Bo Horvat. Thatcher Demko got the win to improve to 10-5-1 on the year after stopping 36 of 37 shots faced in the winning effort.

The San Jose Sharks will look to build on a 4-2 win over Anaheim last time out. Stefan Noesen opened the scoring just under two minutes into the game before Patrick Marleau doubled the lead just 2:40 later. Anaheim would pull a goal back just before the midway point of the 2nd period before Marleau responded with his 2ndgoal of the game. Noesen added his 2nd goal of the game just two and a half minutes into the 3rd to make it 4-1. Anaheim would score a consolation goal with just under two minutes to go, but that’s as close as it would get as San Jose slammed the door shut the rest of the way. Aaron Dell got the win to improve to 9-9-2 on the year after stopping 26 of 28 shots faced in the winning effort.