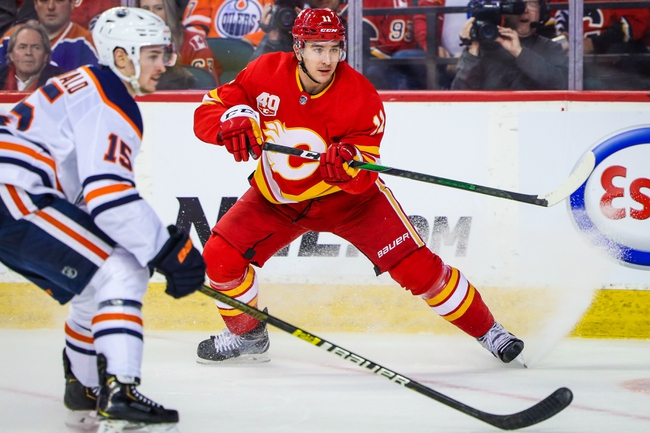 The Calgary Flames and the Edmonton Oilers meet in a Pacific division matchup from Rogers Place on Wednesday night.

The Calgary Flames will look to rebound from back-to-back losses after a 5-2 loss to Ottawa last time out. Ottawa opened the scoring with the lone goal of the opening period before surging ahead 3-0 after 40 minutes of play. The Sens went up 4-0 early in the 3rd before Mark Jankowski got the Flames on the board with just under six minutes to go. Ottawa added an empty-netter to restore the four-goal lead just 2:37 later, but Noah Hanifin would pull a consolation goal back with just under two minutes to play in the game. David Rittich took the loss, falling to 19-12-5 on the year after allowing 4 goals on 20 shots faced in the loss.

The Edmonton Oilers will look to build on back-to-back wins after a 7-3 win over Arizona last time out. Josh Archibald opened the scoring for the Oilers just under four minutes into the game before Sam Gagner and Kailer Yamamoto scored 2:04 apart to stretch the lead to 3-0. Connor McDavid added a 4th goal and Joakim Nygard made it 5-0 less than four minutes later. Arizona pulled one back just :31 later and a 2nd goal less than four minutes later before McDavid would respond with his 2nd goal of the game with less than four minutes to go in the middle period. Arizona would respond but Riley Sheahan would respond for the Oilers to give Edmonton a 7th goal for good measure. Mike Smith got the win to improve to 12-9-3 on the year after stopping 27 of 30 shots faced in the winning effort.

This is going to be a fun game to watch if you like physical, rivalry-style hockey. Both sides have already been warned about the rough stuff between guys like Calgary’s Matthew Tkachuk and Edmonton’s Zack Kassian, and it’ll truly be interesting to see if anyone abides by the rules set by the league office. With all of that said, I’m going to side with the under here. I just see this being a tough game where neither side gets many chances and I think we see more hits logged than shots on goal in this one. Give me the under in what I see being a 3-2 game at best.