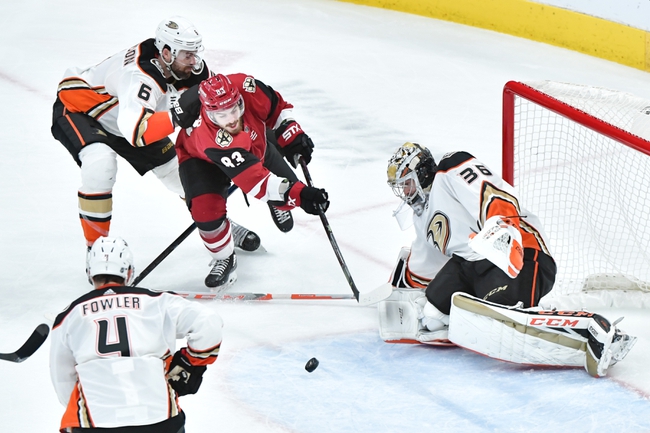 The Arizona Coyotes and the Anaheim Ducks meet in a Pacific division matchup in NHL action from the Honda Center on Wednesday night.

The Arizona Coyotes will look to rebound from back-to-back losses after a 7-3 loss to Edmonton in their last outing. Edmonton opened the scoring just under four minutes into the game before forging ahead 3-0 with a pair of goals 2:04 apart later in the opening period. The Oilers went up 5-0 less than five minutes into the 2ndbefore Taylor Hall got Arizona on the board just :31 later. Christian Dvorak added a 2nd just under four minutes later before the Oilers restored the four-goal cushion. Oliver Ekman-Larsson pulled a goal back just after the midway point of the 3rd, but it wasn’t enough as the Oilers iced the win with an empty net goal late in the 3rd. Antti Raanta took the loss, falling to 9-10-2 on the year after allowing 6 goals on 18 shots faced in the losing effort.

The Anaheim Ducks will look to rebound after a 4-2 loss to San Jose last time out. San Jose opened the scoring less than two minutes into the game before doubling their lead just 2:40 later. The Ducks got on the board just before the midway point of the 2nd but the Sharks would restore the lead by the end of the 2nd. The Sharks pushed the lead to 4-1 early in the 3rd, but even though Nick Ritchie pulled a goal back for Anaheim, it was too little too late as the Sharks held on for the W. John Gibson took the loss, falling to 14-20-3 on the year after allowing 4 goals on 31 shots faced in the losing effort.

I kind of get Arizona being favored here as the Coyotes are the only team in a playoff spot right now, but the problem is that Arizona is struggling right now and the Coyotes haven’t performed well on the road lately. Anaheim hasn’t been a good team to back for much of the season, but maybe a home game after the all-star break will help shake things up a bit. I’m just not about laying juice with Arizona in their current form, so I’ll take a shot with Anaheim as the home dog here.