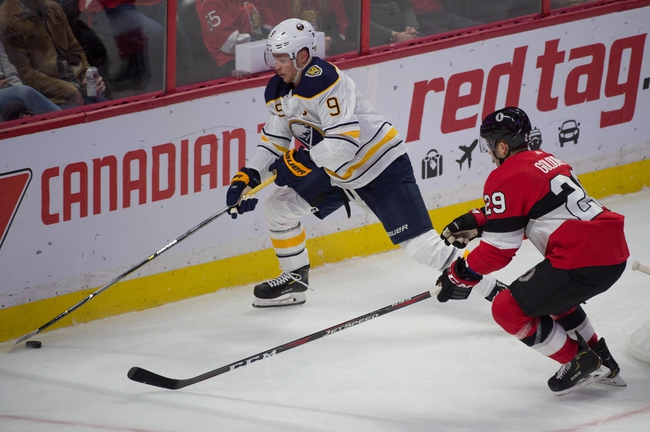 The Ottawa Senators and the Buffalo Sabres meet in an Atlantic division matchup from the KeyBank Center on Tuesday night.

The Ottawa Senators will look to rebound after a 4-3 shootout loss to the New Jersey Devils in their last outing. New Jersey opened the scoring just over eight minutes into the game before Tyler Ennis tied the game at one with just over a minute to go in the opening frame. The Devils re-took the lead early on in the 2nd and held that lead going into the 3rd where Vladislav Namestnikov and Chris Tierney scored :35 apart to give the Sens a 3-2 lead. However, Ottawa wouldn’t be able to hold on as New Jersey tied the game with just over three minutes to go in regulation. Overtime solved nothing, so it was off to overtime where New Jersey buried both of their attempts while Ottawa couldn’t find the net on either of theirs to hand the Devils the win. Marcus Hogberg took the OT loss, falling to 2-2-6 on the year after allowing 3 goals on 53 shots faced in the losing effort.

The Buffalo Sabres will look to start the second half on a high note after a 2-1 loss to Nashville last time out. Sam Reinhart opened the scoring for the Sabres with the lone goal of the opening period coming with just over a minute to go in the 1st. Nashville tied the game at one with the lone goal of the 2nd period and the Predators would forge ahead 2-1 with just six and a half minutes to play in the 3rd. Buffalo tried to find an equalizing goal, but ultimately it was too little too late as Nashville held on for the victory. Linus Ullmark took the loss, falling to 16-13-3 on the year after allowing both goals on 37 shots faced in the losing effort.

This line is steep, but there’s a ton of things going against Ottawa here. The Sens are on a back-to-back which they’ve had little success in dating back a couple of years now, and while I’ve bashed Buffalo lately with their below average play, they still do their best work at home and Ottawa is not a team I’m looking to back on the road where they’ve lost 19 of 24 games this season. Buffalo also starts a five-game homestand with this one and the Sabres need to take advantage of winnable situations like these as the opposition just gets harder and harder from here on out. I think the Sabres run it up a bit here being rested, so I’ll side with the Sabres on the puck line here.