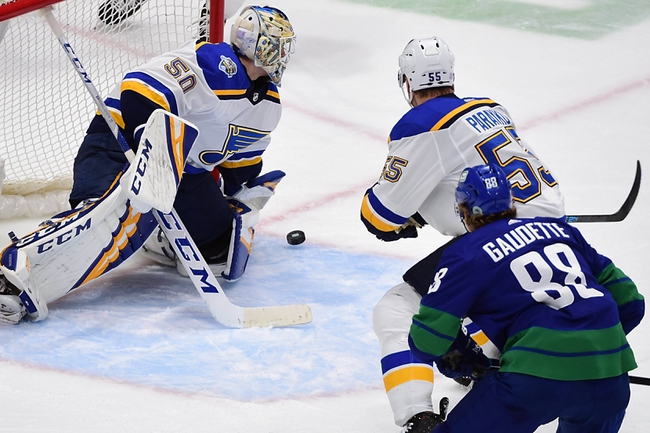 Where to Watch: FS-Midwest Stream live sports and exclusive originals on ESPN+. Sign up now!

The St. Louis Blues and the Vancouver Canucks meet in NHL action from Rogers Arena on Monday night.

The St. Louis Blues will look to rebound from back-to-back losses after a 5-3 loss to Colorado last time out. Colorado opened the scoring less than four minutes into the game before David Perron tied the game at one with just under two minutes to play in the opening period. Oskar Sundqvist gave the Blues a lead just after the opening minute of the 2nd period but Colorado would tie the game at two just a few minutes later and would surge ahead 4-2 by the end of the 2nd period. St. Louis would cut the deficit to 4-3 thanks to Alex Pietrangelo, but the Avalanche would secure the win with an empty-netter in the final seconds of the game. Jordan Binnington took the loss, falling to 22-8-5 on the year after allowing 4 goals on 11 shots before being pulled in the 2nd period.

The Vancouver Canucks will look to build on back-to-back wins after a 4-1 win over San Jose last time out. The 1st period was scoreless before Loui Eriksson gave the Canucks the lead with the lone goal of the 2ndperiod. Tanner Pearson doubled the lead just over five minutes into the 3rd but San Jose would pull a goal back just 2:08 after that. Quinn Hughes would restore the two-goal cushion just :37 later and J.T. Miller added an insurance goal with 4:33 to play and to give Vancouver the W. Thatcher Demko got the win to improve to 9-5-1 on the year after stopping 17 of 18 shots faced in the winning effort.

St. Louis getting a low line is tempting as always this season, and anyone who watches the live show knows that St. Louis is a popular play when Binnington has a rough outing and the all-star break has given he and the Blues time to stew over that game. However, Vancouver has been money at home over the last month, and while St. Louis has had a lot of success against the Canucks, there’s too much value with Vancouver to pass on here. I’ll take the Canucks in this one.