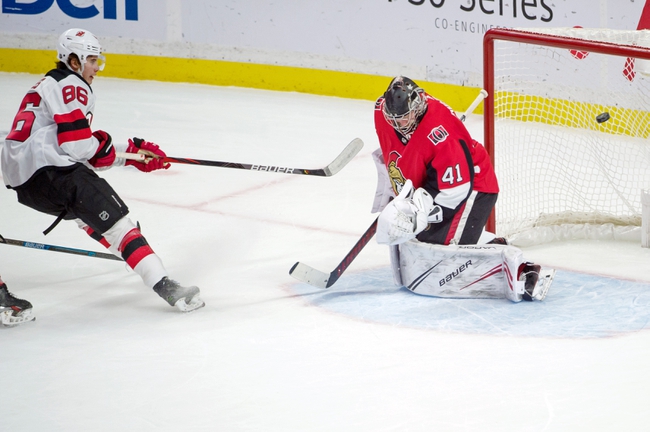 The New Jersey Devils and the Ottawa Senators meet in NHL action from the Canadian Tire Centre on Monday night.

The New Jersey Devils will look to start the second half of the season on a high-note after a 5-0 loss to Columbus for their 3rd straight defeat heading into the all-star break. The Blue Jackets opened the scoring with the lone goal of the opening period before surging ahead 4-0 around the midway point of the 2nd period with 3 goals in a span of 3:34, including a pair in :26. The Jackets added a 5th goal for good measure. The rest of the 3rd saw no action as the Blue Jackets held on for the decisive victory. Cory Schneider took the loss, falling to 0-5-1 after allowing 4 goals on 17 shots before being pulled in the 2nd period.

The Ottawa Senators will look to build on a 5-2 win over Calgary in their last outing. Brady Tkachuk opened the scoring for the Sens with the lone goal of the opening period before Chris Tierney and Connor Brown pushed the lead to 3-0 by the end of the 2nd period. Colin White made it 4-0 early in the 3rd but Calgary would get on the board with just under six minutes to go. Vladislav Namestnikov buried on an empty net to restore the four goal lead bust Calgary would respond with just under two minutes to go. Ultimately it was too little too late as Ottawa held on for the major victory. Marcus Hogberg got the win to improve to 2-2-5 on the year after stopping 40 of 42 shots faced in the winning effort.

I’m not really trying to get behind either of these two teams even after the all-star break, but the fact remains that even with Blackwood back in the fold for the Devils in goal, the Devils just continue to find ways to lose lately. Ottawa hasn’t been playing much better in their own right, but the Senators tend to play their best hockey at home and based on that, I’ll lay the juice with Ottawa at home here.