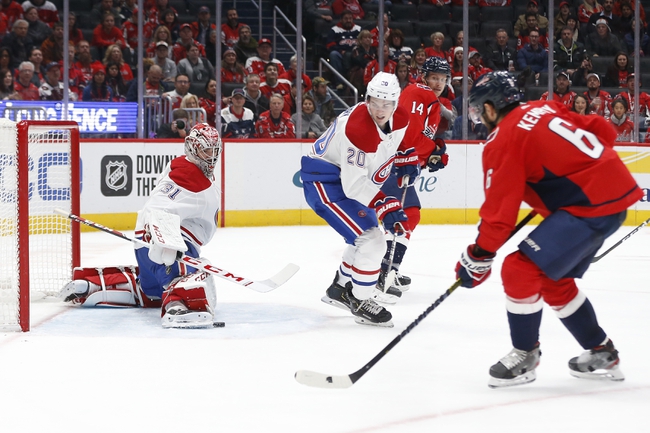 The Washington Capitals and the Montreal Canadiens meet in NHL action from the Bell Centre on Monday night.

The Washington Capitals will look to keep their momentum going after making it three straight wins heading into the all-star break with a 6-4 win over the Islanders in their last outing. Alex Ovechkin opened the scoring for Washington after the midway point of the opening period before New York tied the game and took the lead in a span of 2:38. The Isles went ahead 4-1 by the end of the 2nd but Washington decided to queue up a comeback as Carl Hagelin and Ovechkin scored 2:45 apart to make is 4-3 and Tom Wilson and Jakub Vrana scored 2:58 apart to make it 5-4 Washington before Ovechkin completed his hat trick with an empty net goal in the final minute of the game. Ilya Samsonov got the win to improve to 15-2-1 on the year after stopping all 7 shots faced in relief of Braden Holtby who got pulled in the 2nd period after giving up 4 goals on 17 shots faced.

The Montreal Canadiens will also look to build on back-to-back wins after a 5-4 shootout win over Vegas in their last outing. Nick Cousins opened the scoring just under six minutes into the game before Ilya Kovalchuk added a 2nd goal and Joel Armia made it 3-0 by the end of the opening period. Vegas pulled a pair of goals back in the 2nd before Cousins added his 2nd goal of the game to restore the two-goal lead. The Habs almost held on for the win but Vegas would tie the game with a pair of goals 1:50 apart in the final two minutes of the game. Both teams scored in the opening round of the shootout, and we went to round 4 before Tomas Tatar potted the shootout winner to give the Habs the extra point.

I’m tempted by Washington with a low line on the road here, as the Capitals have played some of their best hockey away from home this season. However, while one guy doesn’t make a whole team, Alex Ovechkin will miss this game after skipping the all-star game, and that’s been a huge blow as the great 8 has scored 8 goals in his last three games. Maybe the all-star break did Montreal some good and helped the Habs refresh coming into this game, so I’ll take a shot with Montreal and the plus money in this one.

Get Premium Picks Start Winning Now »
The pick in this article is the opinion of the writer, not a PickDawgz site consensus.
Previous Pick
NHL Power Rankings - All 31 Teams: 1/27/20
Next Pick
Ottawa Senators vs. New Jersey Devils - 1/27/20 NHL Pick, Odds, and Prediction