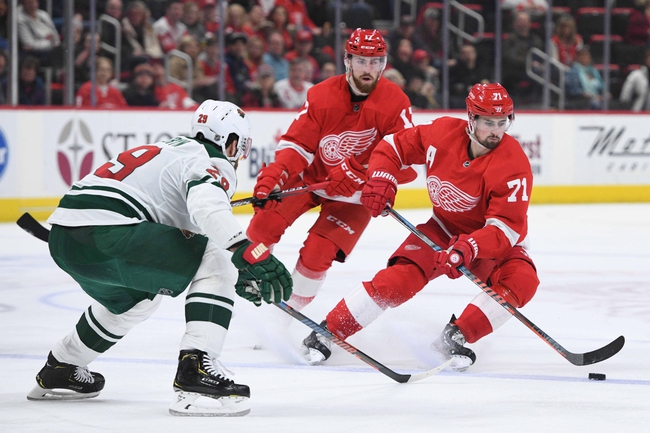 The Detroit Red Wings and the Minnesota Wild meet in NHL action from the Xcel Energy Center on Wednesday night.

The Detroit Red Wings will be out to snap a five-game losing streak after a 6-3 loss to Colorado in their last outing. Tyler Bertuzzi staked the Red Wings an early 1-0 lead just 2:28 into the game and the lead would hold going into the 2nd where Colorado surged ahead 2-1 with a pair of goals 1:53 apart to carry a lead into the 3rd. The Avs would strike two more times in :53 to make it 4-1 before Dylan Larkin pulled a goal back just 1:50 later. Colorado would respond with just over six minutes to go before Givani Smith made things interesting at 5-3 with just over two minutes to go. Colorado would snuff out the comeback attempt though, adding an empty-netter with one minute to go in the game. Pavel Francouz got the win to improve to 12-4-2 on the year after stopping 22 of 25 shots faced in the winning effort.

The Minnesota Wild will look to bounce back from a 5-4 loss to the Minnesota Wild in their last outing. The Panthers opened the scoring just over four minutes into the game before Jared Spurgeon tied the game at one for Minnesota in the dying seconds of the opening period. The Panthers re-took the lead early on in the 2ndbefore Luke Kunin tied the game at two for Minnesota. Florida again took the lead just over two minutes into the 3rd period but Zach Parise would tie the game just 2:17 later and Kunin would give Minnesota the lead with his 2nd goal of the game just 2:47 later. Florida would tie the game at four with just over four minutes to go and we looked destined for overtime before Florida potted the game-winning goal with just :06 to go. Alex Stalock took the loss, falling to 11-8-3 on the year after giving up all 5 goals on 25 shots faced in the losing effort.

I think the only case you could make for Detroit is that they’ve had success in this matchup in the past and that the price doesn’t justify a team like Minnesota that’s lost 7 of their last 10 games. However, Detroit’s just been bad for most of the season, and even though they’ve put up a fight on the road, it’s still a Detroit team that’s lost 18 of their 22 road games so far this season. I just think this is a good game for Minnesota to kind of springboard back on track, so I’ll side with Minnesota on the puck line here to get the price down.

Get Premium Picks Start Winning Now »
The pick in this article is the opinion of the writer, not a PickDawgz site consensus.
Previous Pick
Columbus Blue Jackets vs. Winnipeg Jets - 1/22/20 NHL Pick, Odds, and Prediction
Next Pick
NHL Power Rankings - All 31 Teams: 1/27/20