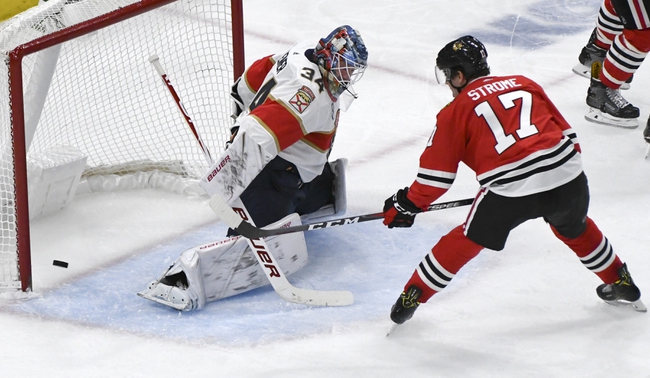 Where to Watch: FS-Florida, NBCS-Chicago Stream live sports and exclusive originals on ESPN+. Sign up now!

The Florida Panthers and the Chicago Blackhawks meet in NHL action from the United Center on Tuesday night.

The Florida Panthers will look to build on a 5-4 win over the Minnesota Wild last time out. Keith Yandle opened the scoring just over four minutes into the game before Minnesota tied the game at one in the dying seconds of the opening period. Aleksander Barkov gave Florida a 2-1 lead but once again, the Wild would tie the game just 3:31 later. Evgenii Dadonov gave Florida a 3rd lead just over two minutes into the 3rd period but the Wild would tie the game and take a 4-3 lead in a span of 2:47 just a couple of minutes later. Vincent Trocheck tied the game at four and we looked headed for overtime before Noel Acciari potted the game winner for the Panthers with just :06 to play. Sergei Bobrovsky got the win to improve to 18-12-4 on the year after stopping 29 of 33 shots faced in the winning effort.

The Chicago Blackhawks will look to build on their current five-game winning streak after a 5-2 win over the Winnipeg Jets in their last outing. Alex Nylander opened the scoring just under three minutes into the game for Chicago before Erik Gustafsson doubled the lead with just over six minutes to go in the period. Winnipeg pulled one back late in the 2nd period but David Kampf restored the two-goal lead just before the halfway point of the 3rd period for the Blackhawks. Brandon Saad pushed the lead to 4-1 with just under six minutes to go, but Winnipeg would pull a goal back late in the 3rd to make it 4-2 with just over two minutes to go. Dominik Kubalik would ice Chicago’s victory with an empty-netter just :35 later. Robin Lehner got the win to improve to 15-7-4 on the year after stopping 36 of 38 shots faced in the winning effort.

The Panthers have had some success on no rest this season, but the problem for me is that a lot of that success came at home, and the game against Minnesota was a back-and-forth tilt that saw the Panthers have to really push and rally late to pick up the win. Chicago is rested, and the Blackhawks are playing arguably their best hockey of the year and bottom line, we’re getting a cheap price with the Blackhawks as well given their current run of form. I’ll lay the juice with Chicago at home in this one.