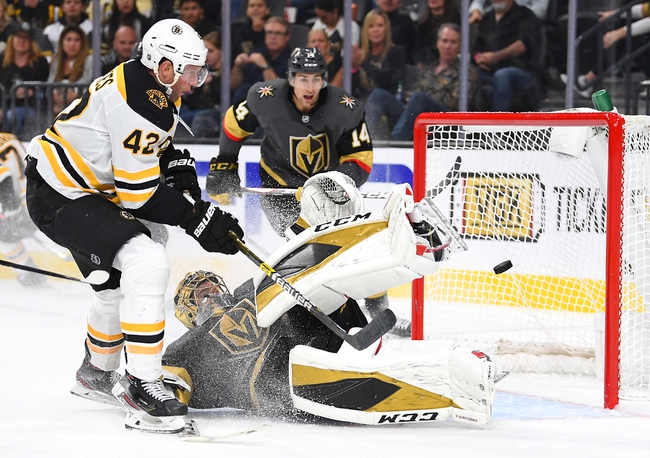 The Vegas Golden Knights and the Boston Bruins meet in NHL action from the TD Garden on Tuesday night.

The Vegas Golden Knights will look to rebound after a 5-4 shootout loss to Montreal in their last outing. Montreal surged out to a 3-0 lead after 20 minutes of play before Jonathan Marchessault got Vegas on the buard just over nine minutes into the 2nd and Paul Stastny pulled it back to 3-2 by the end of the 2nd period. Montreal restored the two-goal lead just before the midway point of the 3rd period but Max Pacioretty would score against his old team with just under two minutes to go and Reilly Smith helped complete the comeback, tying the game at 4-4 with just :08 to go. Overtime solved nothing so it was off to the shootout where both teams scored on their first attempt but it was Montreal who would emerge victorious with a goal in round 4 of the shootout. Marc-Andre Fleury took the OT loss, falling to 19-11-4 on the year after allowing 4 goals on 32 shots faced in the losing effort.

The Boston Bruins will look to rebound from a 4-3 loss to Pittsburgh last time out. Patrice Bergeron opened the scoring just :11 into the game before Anders Bjork doubled the lead just 1:51 later. David Pastrnak pushed the lead to 3-0 for the Bruins with just under five minutes to go in the 1st. Pittsburgh pulled a goal back just 1:27 later and cut the deficit to 3-2 within the first minute of the 2nd period. The Pens would tie the game just under two minutes into the 3rd period before taking the lead with just over seven minutes to go. Jaroslav Halak took the loss, falling to 11-6-6 on the year after giving up all 4 goals on 22 shots faced in the losing effort.

I’m tempted by Vegas and the plus money as the Golden Knights looked decent in rallying in a losing effort to Montreal while the Bruins just collapsed against Pittsburgh. However, the Golden Knights haven’t had any luck recently against the Bruins and despite their issues, Boston is still one of the better teams at home in the NHL this season. Vegas has had issues winning games lately as well so I’ll lay the juice with Boston in this one.