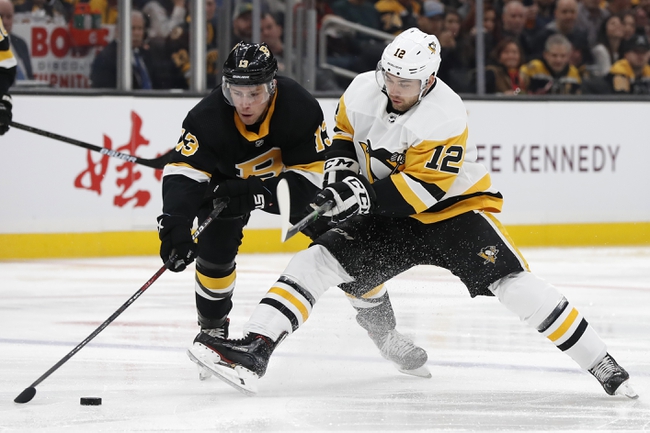 Where to Watch: TVA, NBC Stream live sports and exclusive originals on ESPN+. Sign up now!

The Boston Bruins and the Pittsburgh Penguins meet in NHL action from the PPG Paints Arena on Sunday afternoon.

The Boston Bruins will look to build on a 4-1 win over the same Pittsburgh Penguins in their last outing. Pittsburgh opened the scoring just :24 into the game before Sean Kuraly tied the game at one just after the midway point of the opening period and Par Lindholm gave Boston the lead just 2:13 later. The 2-1 lead would hold up before Patrice Bergeron added an insurance goal for the Bruins just over three minutes into the 3rdbefore Brad Marchand potted a 4th on an empty net in the last minute of the game to secure the win. Jaroslav Halak got the win to improve to 11-5-6 on the year after stopping 29 of 30 shots faced in the winning effort.

The Pittsburgh Penguins will look to build on a 2-1 win over the Detroit Red Wings in their last outing. The game was scoreless through the opening 20 minutes before Detroit took the lead with the lone goal of the 2ndperiod. Bryan Rust tied the game at one just under four minutes into the 3rd, but neither side would produce a game winning goal through the remainder of regulation. It was off to OT where Sidney Crosby tipped home the game winning goal just 1:33 into the extra frame. Matt Murray got the win to improve to 14-6-4 on the year after stopping 28 of 29 shots faced in the winning effort.

Boston’s had Pittsburgh’s number for the most part lately, but the problem is a lot of that success has come in Boston. When the two play in Pittsburgh, it’s usually the Penguins that have the upper hand and I just think that the Penguins will exact some revenge here. I’ll lay the juice with the Penguins at home in this one.