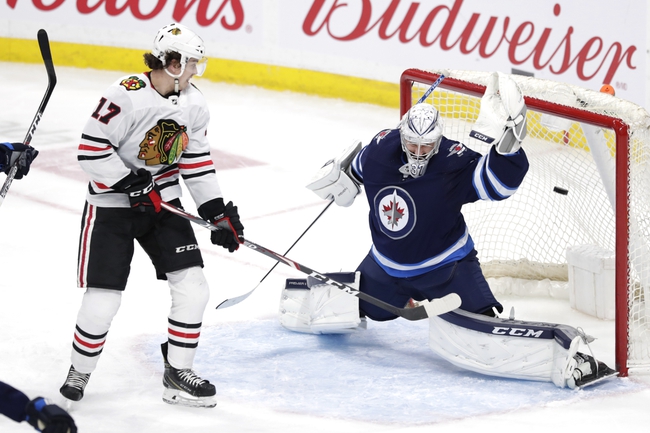 The Winnipeg Jets and the Chicago Blackhawks meet in NHL action from the United Center on Sunday night.

The Winnipeg Jets will look to bounce back after a 7-1 beatdown loss to Tampa Bay in their last outing. Tampa Bay opened the scoring just before the midway point of the opening period before doubling the lead just 2:54 later. The Lightning made it 3-0 before the end of the 1st period and 5-0 with just under nine minutes to go in the 2nd before Jack Roslovic got the Jets on the board just :34 later. That was as close as Winnipeg would get the rest of the way as the Lightning scored two more in the 3rd 2:57 apart to secure the win. Connor Hellebuyck took the loss, falling to 21-14-4 on the year after allowing 5 goals on 12 shots before being pulled in the 2nd period.

The Chicago Blackhawks will look to add to their current four-game winning streak after a 6-2 win over Toronto last time out. Drake Caggiula opened the scoring just :21 into the game before Jonathan Toews doubled the lead just over five minutes later and Brandon Saad pushed the lead to 3-0 just after the midway point of the 1stperiod. Toronto pulled a goal back in the first 25 seconds of the middle period before Toews restored the three-goal cushion just 2:54 later. Dominik Kubalik added a 5th just after the midway point of the 2nd period and Toronto responded with just under five minutes to go in the 2nd. Kubalik added his 2nd goal of the game just 2:25 later to make it a 6-2 game, a lead that the Blackhawks carries through the 3rd to the finish line. Corey Crawford got the win to improve to 9-13-2 on the year after stopping 31 of 33 shots faced in the winning effort.

Normally I’m not a fan of teams on a back-to-back especially when they have to travel for the second game like Chicago has to for this game. However, Winnipeg hasn’t been as strong lately, and the Blackhawks are rolling right now in addition to winning their last four games on the second half of a back-to-back. Chicago looks like a team that’s serious about a potential playoff push so I’ll side with the Blackhawks for another win here.

Get Premium Picks Start Winning Now »
The pick in this article is the opinion of the writer, not a PickDawgz site consensus.
Previous Pick
Carolina Hurricanes vs. New York Islanders - 1/19/20 NHL Pick, Odds, and Prediction
Next Pick
NHL Power Rankings - All 31 Teams: 1/20/20