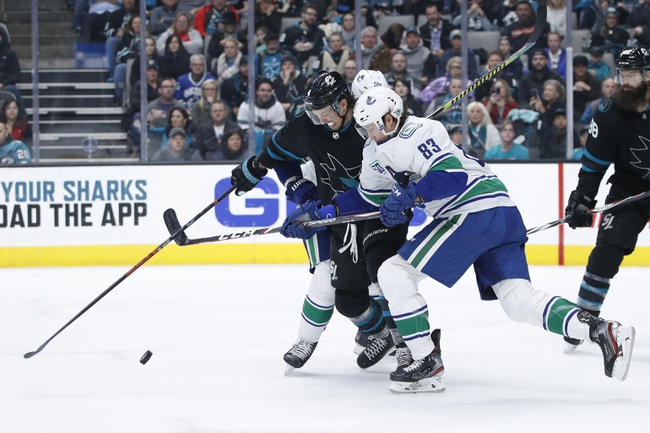 The San Jose Sharks and the Vancouver Canucks meet in a Pacific division matchup in NHL action from the Rogers Arena on Saturday night.

The San Jose Sharks will look to rebound from back-to-back losses after a 4-0 loss to Colorado in their last outing. Colorado opened the scoring just :45 into the game and doubled their lead in the dying seconds of the opening period. The Avalanche pushed the lead to 3-0 just before the midway point of the 2nd period and added a 4th for good measure just 2:43 later. San Jose would try to break the seal on Colorado’s goal but the Sharks would come away empty-handed, both on the scoreboard and in the win column. Martin Jones took the loss, falling to 13-16-2 after allowing all 4 goals on 38 shots faced in the losing effort.

The Vancouver Canucks will look to build on a 3-1 win over Arizona in their last outing. Arizona took the lead just under eight minutes into the game before Bo Horvat tied the game at one with just under five minutes to go in the opening frame. Jake Virtanen gave the Canucks the lead with just over four minutes to go in the 2ndperiod and Tanner Pearson would ice the win for Vancouver by potting an empty-netter in the last minute of regulation time. Jacob Markstrom got the win to improve to 18-13-3 on the year after stopping 34 of 35 shots faced in the winning effort.

Part of me wanted to consider San Jose and the plus money, but the problem is that the Sharks just aren’t playing consistent hockey right now, and I’m just having a hard time getting myself to think that San Jose can keep this one reasonably close. Vancouver plays their best hockey at home by far, and are playing much better than San Jose is right now. I’ll side with the Canucks in regulation to get a better price on the win.